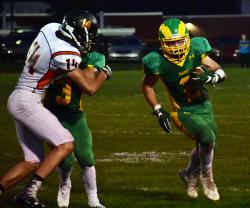 WYALUSING — Tunkhannock quarterback Jack Chilsen found Evan Turner on a crossing route for a 68-yard touchdown on the second play of the game in Tunkhannock's 34-7 win over Wyalusing on Friday evening.

That play would set the tone for the game, as Tunkhannock held Wyalusing to no offensive touchdowns for the entire game.

On their third drive, the Tigers took things to the ground with four plays of 48 yards before Logan Cywinski rushed up the middle from 5 yards out to give Tunkhannock a 14-0 advantage with 3:48 left in the opening quarter.

Wyalusing's Shane Fuhrey gave the Rams some hope in the second quarter, when he picked off a Jack Chilsen pass and returned it 35 yards for the Wyalusing score, their only score of the game.

The Tigers fought back.

Cywinski added a second score late in the second quarter when Chilson handed him the ball after a fake pass and Tunkhannock pulled ahead, 21-7, with 1:23 remaining in the half.

Tunkhannock prevented a late second quarter Wyalusing drive from scoring, and maintained their multiple score lead the rest of the way.

In the second half, a false start penalty pushed Wyalusing back to its own seven, and a mishandled snap sent Burke scrambling after the ball into the end zone, where the ball would again be dropped before Tunkhannock's Tyler Pugh jumped on it for the touchdown.

The Tiger defense held the Rams in check from there, with Dennie Robinson contributing two interceptions along the way and special teams adding a blocked punt.

Cywinski would score one more time for the Tigers to bring the score to its final, 34-7.

Carl Gowin returned for the Rams this week and rushed nine times for 39 yards and Riley God finished with four carries for 20 yards. Quarterback Calvin Burke had 87 yards passing on seven completions in 20 attempts, Will Martin added two receptions for 47 yards and Jon Morrison had four receptions for 35 yards.

Cowanesque Valley (1-3) will travel to Wyalusing (2-2) to take on the Rams this Friday.