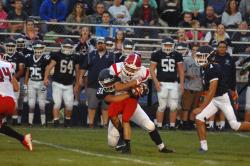 MUNCY — The Muncy Indians improved to 2-0 on the season with a 31-21 win over the visiting Troy Trojans last night at McClean Field.

"This was a great win for Muncy," said Indian head football coach Shawn Tetrault afterward. "The offensive line set the tone tonight, and for the second week in a row, Colby (Alpaugh) ran hard."

The Trojans started well, taking the opening kickoff and marching 65 yards in only six plays. The drive was highlighted by a 43-yard burst from fullback Tyler Williams, before running back Walker Kelly finished with a 5-yard burst up the middle for the score. Seldon Rogers added the extra point, and at 9:26, Troy led 7-0.

Muncy would answer right back, traveling 60 yards in nine plays due largely to an efficient short passing game from QB Coleman Good. On second-and-5 from the 19, Colby Alpaugh ran to paydirt, and Nate Paisley's extra point tied the game at 7-7 with 7:37 left in the first.

The Trojan offense continued to assert itself, as they put together a second consecutive 65-yard scoring drive. This time they covered the distance in 12 plays, 11 of them on the ground as the option offense kept the Indian defense off guard. Bailey Cohick ran in from 6 yards out, and Rogers' PAT made it 14-7 at the 2:58 mark.

The Trojans forced Muncy's first punt on the next series, and an impressive Ja Wallace return set them up with first-and-10 at the Indian 33. But two plays later Clark Jackson's pass was intercepted and the momentum shifted. Good led the Indians on a nine-play scoring drive, but a 2-yard TD run by Chad McElwee was nullified by a holding penalty. The Indians settled for a 32-yard Paisley field goal, and the lead was cut to 14-10 with 8:36 left till halftime. The teams would then trade punts until less than a minute left in the half when a big 53-yard punt return set the Indians up with first down at the 17. Good would then connect on second down with Dylan Wilt for the 17-yard strike with only two seconds left. Paisley's PAT made it 17-14 at halftime.

The teams traded punts to open the third quarter before Muncy drove deep into Trojan territory. On fourth-and-6 from the 11, Good was intercepted in the end zone by Seldon Rogers to end the threat. On their next drive, they would add to the lead, as a nine-play, 58-yard drive was capped by a 1-yard Michael Kustanbauter run. Paisley's kick made it 24-14 with 11:30 left. The Indians would add one final score as Alpaugh ran in from three yards out to make it 31-14 with 3:07 left. The Troy fans' final chance to cheer came as Clark Jackson returned the ensuing kickoff 91 yards, and Rogers' third PAT made the final 31-21.

Alpaugh led all rushers with 140 yards and two scores on 27 carries. Good passed for 159 yards and a score.

Jackson led Troy with 103 yards rushing and one score.