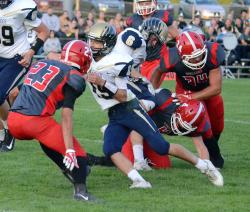 TROY — The Troy Trojans kicked off their 2017 campaign by tackling a tough Bald Eagle team from District VI, and came out on the short end of a 33-13 score.

"I thought the kids gave a valiant effort in the second half, but we made too many mistakes," said head coach Jim Smith afterward.

The Eagles from Bald Eagle unveiled a spread offense that had a difficult time gaining any yardage on the ground against an inspired Trojan run defense. However, they had some success through the air, and took their opening drive to the Troy 27 before a blitzing defense caused a fumble recovered by Trojan defensive lineman Jared Granger.

Troy's option offense would struggle early on, and a three-and-out gave the Eagles the ball back at their own 25. From there, they chipped away with short passes to move all the way to the Trojan 13 on a time consuming 17-play drive. But the defense would hold, forcing a 30-yard field goal to make it 3-0 at the 11:50 mark of the second quarter. The Trojan offense continued to struggle, but after trading punts, had good field position at midfield. A 24-yard completion on a fake punt from Clark Jackson to Michael Borden set them up with first down on the Eagle 20, but a short run, fumble, and incomplete pass forced Troy to attempt a 35-yard field goal. Seldon Rogers' kick was true, but the Trojans were penalized 10 yards for holding on the play, taking the tying points off the scoreboard. A fumble on fourth-and-18 ended the threat. Bald Eagle would answer right back, scoring on a 33-yard run to make it 10-0 with 2:24 left in the half. Troy would fumble once more before the half ended, setting up the Eagles for a 32-yard field goal just as time expired, sending the Trojans into the locker room down 13-0.

"We came out in the second half in double tight end formation and tried to keep things basic, establish the run, and I thought we did a nice job to tie the game," said Coach Smith.

That adjustment led to a 12-play, 86-yard drive where five different backs carried the load. QB Clark Jackson would score on a 24-yard jaunt, and a blocked extra point try left the score 13-6 with 7:05 left in the third.

The Trojan defensive was inspired by the score, and caused a fumble on the Eagles' first play from scrimmage. Eric Stone recovered on the 34, and it would only take seven plays for the Trojans to capitalize, with Nate Martin crashing in from 3 yards out. Rogers' extra point was good, and at the 3:56 mark, the game was tied at 13. The teams then traded punts before the Eagles would catch the Trojan defense off guard with a quick hitting run from shotgun that scored from 25 yards out. The extra point was true and the lead was now 20-13. Troy went right back to work, moving from their own 34 to the Eagle 23 before losing their third fumble on the night. From there, another quick run up the middle went for 64 yards to extend the lead to 26-13 with 7:52 left. The Eagles' final score was a 22-yard run to make the final 33-13.

Clark Jackson led the Trojans with 57 yards on 11 carries with one score, while Nate Martin added 40 yards and a rushing touchdown. Next Friday night the Trojans travel to Muncy for another non-league contest.