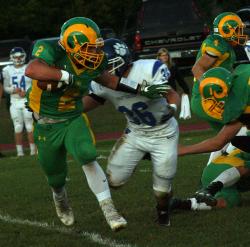 WYALUSING — North Penn-Mansfield's Brendan Hill led the Panthers with 88 rushing yards on 17 carries and two touchdowns to their 14-0 win over Wyalusing on Friday evening.

After trading punts on their opening drives, Wyalusing quarterback Calvin Burke was intercepted by NPM's Kipp Hilson, giving them possession inside of Wyalusing's 7-yard line.

Hill would capitalize on the NPM interception and score on a dive play to bring the score to 6-0 with 6:49 left in the first quarter.

Nobody would've faulted Wyalusing for folding after having their momentum taken away, but they did not.

The Rams' defense would force four turnovers on downs and one interception by Will Martin before halftime, thwarting the Panthers' attack.

The Rams' defense was energized, but that energy wasn't enough to get their offense past the stout NPM defense led by defensive tackle Justin Kriner.

The Panthers' defense held steady and did not waver, keeping the Wyalusing offense on their side of the field for most of the game and allowing only 25 yards rushing total.

"My hat's off to coach Dickinson," Wyalusing coach Jordan Clark said after the game. "That might be one of the best defenses in the state, they only allowed 140 yards in week one and held Athens' Zack Jayne down last week, that's just a hell of a defense."

Wyalusing kept the game close in the third quarter, but after the start of the fourth, the game was put out of reach.

NPM pinned Wyalusing deep in their own territory and forced a three-and-out. After the punt, NPM was set up with good field position at the Wyalusing 22-yard line.

Similar to the first NPM score, the Panthers handed the ball off to Brendan Hill on the first play after the punt and Hill hit his hole and got behind Wyalusing's secondary for a 22-yard score.

NPM would convert the two-point conversion on a Brent Burleigh pass to Justin Shedd to bring the game to its final score, 14-0.

"Every win is enjoyable," NPM coach Tom Dickinson said after the game. "Our defense played their butts off. We had a good gameplan and our kids stuck with it. It's good to see when the kids trust their system and execute. I'm proud of that. We tried to take advantage of the field position we were given and it worked. The early score was off of a defensive turnover. We have to be more consistent on offense but penalties really hurt us tonight. (Brendan) hit the hole two times and found the end zone for us, he made some good plays."

"Our kids played their hearts out tonight," Clark said. "That's all we could really ask of them. We call ourselves the ya-ya boys, that's our mantra, we play blue-collar and that's how we played today. Our defense played their butts off, and they kept us in the game until the bitter end. Offensively we could just not move the ball. We didn't have our running back who's a big part of our offense, we were shaky against their defensive line, our offensive line has to be better than that. I'm proud of our kids, they were put in tough and uncomfortable positions and responded well, I'm really proud of them."