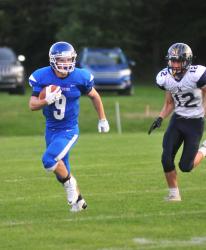 BLOSSBURG — The North Penn-Mansfield Panthers opened their season with a home win, Friday night, against the Northwest Rangers, in what would become a defensive slugfest.

Early in the game, both defenses worked a "bend, don’t break" philosophy, while the two offenses struggled to build momentum and obtain fluidity in their possessions. Early drives stalled with miscues in the passing game and costly penalties, causing headaches for both sidelines.

It took nearly 11 minutes for the offenses to finally string plays together, as Northwest quarterback, David Piestrak, took advantage of a conversion on third-and-long, before keeping the ball on two consecutive plays, culminating in a diving touchdown to give Northwest a 7-0 lead.

After big stops by both defenses, North Penn-Mansfield made use of the little time remaining in the first quarter, as they were set up in excellent field position after a shallow Northwest punt. The short runs used by the Panthers early in the game opened up the opportunity for the short pass behind the linebackers, which Panthers quarterback, Brent Burleigh, executed to perfection, as he connected with wide receiver, Dylan Wesneski, for a 59-yard touchdown reception to tie the game as time expired in the quarter.

The beginning of the second quarter saw both defenses stand tall against their offensive counterparts. Taking advantage of a giant stop on third down by their defense, the Panthers’ offense pounded out a steady drive on the ground, led by Justin Shedd and Brendan Hill. The short runs paid off for the Panthers, as the Rangers’ defense was caught with a deep pass from Burleigh to a wide-open Nick Kasper to put the Panthers up 14-7.

After a strong return on the kick-off, the Rangers started from their own 48-yard line and immediately went work, crafting a steady drive toward the North Penn-Mansfield end zone. The Rangers marched down the field like a well-oiled machine, before the drive was derailed by a fumble deep in Panther territory. The ensuing drive stalled, giving the ball back to the Rangers with excellent field position before the half.

After a penalty for an illegal facemask against the Panthers, the Rangers stalled out inside of Panther territory, but well inside the range of kicker, Sam Saxe, who split the uprights with a 36-yard field goal to bring the score to 14-10.

The two teams entered the second half with hopes of seeing more efficient offenses, but would see the defensive squads come to the forefront. A back-and-forth struggle between two power-house defenses led the way of the game until the final few minutes in the fourth quarter.

After a Panthers drive stalled, late in the fourth, the Rangers took advantage of a miscue on the North Penn-Mansfield punt that landed inside of Panther territory at the 49-yard line. The Rangers’ offense was unable to convert on a fourth-and-long, turning the ball over on downs and sealing their fate.

The Panthers start off their season with a strong defensive win and prepare for the first road test of the season at Athens next Friday.