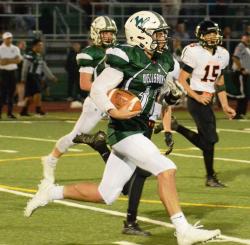 WELLSBORO — It seemed like whatever Quinn Henry wanted to do on Friday night, he was able to do.

Henry did damage with his legs, and his arm, as Wellsboro stayed unbeaten with a 50-9 win over Towanda.

"I think we came out a little slow and didn't expect to get smacked around like we did," Henry said. "But we came together and got some stops and the offensive line paved the way for everything. I thought we executed great on offense and Dalton Prough came up huge again with another touchdown. I think overall we are playing really well but there is still room to get better."

Henry ran for 209 yards on just 10 carries, scoring on half of his carries. Henry was also 5-for-8 passing for 129 yards and a touchdown.

Henry started the scoring at 10:28 of the first quarter as he took off on a 31-yard touchdown run. The extra point failed and it was 6-0.

Towanda answered in the second quarter as Luke Tama hauled in a 9-yard touchdown from Tanner Kunkle. Zach Sims hit the extra point and at 11:47 it was 7-6 Towanda.

From there it was all Henry and the Green Hornets.

On the ensuing drive Henry took off for an 80-yard touchdown run and completed a two-point pass to Dalton Prough to make it 14-7 at 10:57.

Henry then connected with Prough on a 62-yard touchdown pass and Henry ran in the two-point try to make it 22-7 at 9:39.

Wellsboro struck again right after as Henry scored on a 1-yard run and Nic Ingerick hit the extra point at 5:36 to make it 29-7. And Henry had a 55-yard touchdown run at 3:07 and Ingerick made the kick and it was 36-7 at the half.

In the third quarter Henry had his fifth rushing touchdown, going in from 2 yards out at 10:04 and Ingerick hit the kick to make it 43-7.

Towanda got a safety with 11:44 left in the game to cap the scoring.

Prough had four grabs for 81 yards and a score and Chase Moser had a 48-yard catch. Hauser ran for 36 yards on seven carries, Connor Ramsey ran for 20 yards and Moser had 15 yards, while Alex Kozuhowski had 9 yards.

Kunkle threw for 64 yards on 8-for-13 passing with a touchdown and Mason Johnson threw for 13 yards.

Zane Neubert ran for 45 yards on 14 carries and Dylan Hartmann ran for 12 yards, while Jyshaire Robinson ran for 8 yards.