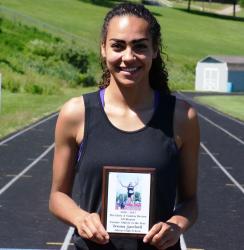 It's hard to remember a time when Athens' Breana Gambrell wasn't the most dominating athlete in the region.

She was The Daily & Sunday Review All-Region Newcomer of the Year for all sports as a freshman.

Last year she took it a step further, being named the All-Region Female Athlete of the Year.

This year, Gambrell was more dominant than ever before, and for the second year in a row she's the Female Athlete of the Year.

"It's a good feeling to see all the hard work pay off," Gambrell said. "Hopefully I can keep it going, so next year is even better."

A three-sport standout, Gambrell has been the All-Region girls' soccer Defensive Player of the Year the past two years.

During the basketball season Gambrell was an All-Region pick, and then this spring the junior took her track and field performances to a whole new level.

After winning state titles in the long jump both her freshman and sophomore years, and earning four state medals in her first two years of high school, Gambrell put on an even bigger show this year.

While Gambrell has been a state champion in track and field, she's really hoping next year to be able to make it to states in her other sports.

"To come close to district titles in both (soccer and basketball), I hope to get that this year (senior year)," Gambrell said. "My team looks at me as a leader, so I try and do my best and lead them, because I have been there before."

Next year Gambrell believes the Wildcats have the teams capable of winning titles.

"I'd like to get that district title for soccer, we have a great chance, a lot of returnees," Gambrell said. "We have a decent chance in basketball as well."

While she puts a ton of time in to get better in track and field, each year that goes by she feels more and more confident in her other sports as well.

"Over the years I have definitely developed more confidence and now being a senior, I am not nervous," Gambrell said. "They look to me as a leader when they are nervous, that's what I try and do, I try and lead them because I was in their shoes before."

While track and field makes it tough for Gambrell to spend all summer on travel soccer and basketball teams, she is putting work in.

In soccer, defense is something that Gambrell just started doing when she got to high school three years ago, and now she is much more comfortable in the role.

With track and field Gambrell has even bigger goals for herself next year.

"Hopefully hit those 21's (21 feet in the long jump), and keep that national mark up there," Gambrell said.

While Gambrell is the area's athlete of the year, she knows that her teammates played a big role in her accomplishments.

"They are a huge part, there is no way I could have done any of this without their support and their help," Gambrell said.

In all three of her sports it's a lot of the same girls that are Gambrell's teammates.

"It's fun, we are not only just a team, we are a family too, we do every sport together, we grew up together," Gambrell said.

Along with her teammates, Gambrell knows her coaches (Rich Pitts in soccer, Kelly Burkhart in basketball and her father, Ben Gambrell, in track and field all played a key role in her success).

"They were the main support," Breana Gambrell said. "They were the rock, they are what pushes the programs forward, and push the athletes. Without them nothing can be accomplished."

Now, it's time for Gambrell to head to some national events as she goes to New Balance Nationals this week and later this month goes to the Junior National Championships in California.

"I am super excited, I can't wait to get there, I'm just counting down the days," Gambrell said. "I just had practice today and am hitting my 20's again. It's a bunch of mini vacations, it's what I love to do."