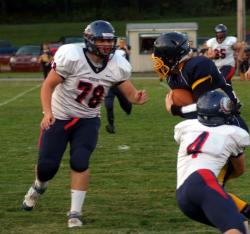 WESTFIELD — It's not often that a crowd can be wildly entertained by a matchup between two 0-3 teams, but that's what happened as Cowanesque Valley defeated Sayre in overtime for a 20-12 win.

With the game knotted at 12-12 at the end of regulation, the contest went into overtime with a shootout from the 10-yard line. The Indians won the toss and took the ball.

They wasted no time in scoring on the first play when quarterback Seth Huyler called his own number and scampered in for the score. With no PATs made on the night, CV elected to try a two-point conversion and trusted their speedster, Matt Barber, who raced along the home side of the field and edged his way into the end zone for a 20-12 lead.

Barber finished the game with six receptions for 102 yards and two touchdowns, 67 yards on the ground on seven carries, and a two-point conversion. Huyler had a hand in all three touchdowns and passed for 117 yards.

Now the Redskins had their chance. After a motion penalty set them back 5 yards, Nate Garrity picked up a couple yards. Then Corbin Brown hit Ethan Miller at the three for a 10-yard gain.

Sayre went to Garrity again, but he slipped on his cut, injured his leg, and had to be helped off the field.

Now facing fourth-and-goal at the three, the Redskins handed the ball to Isaiah Firestine and the Indians' defense came up big and stopped Firestine at the two before running off the field in a frenzy.

"It was a great game," said Sayre head coach Steve Satterly. "The only problem is that someone had to lose and someone had to win and this time we came out on the other end. The kids played hard. They played awesome. They're great kids and their effort was incredible."

Cowanesque opened the game with an 11-play drive in which the punter, Shadle Thomas, play a pivotal part. Dropping back to punt, the Redskins pressured Thomas, forcing him to take off running to pick up the first down.

Four plays later, Hoyer flipped a short pass to Barber, who raced up the sideline from 11 yards out and dove into the end zone for the score to take a 6-0 lead.

The Redskins opened their first possession with a 9-yard run from Firestine and then a 17-yard burst up the middle from Austin Arnett. Firestine took the next handoff for 43 yards, and three plays later Arnett scored from the four to tie the game.

The Indians punted on their next possession and Gage Carnrike returned it to the CV 35-yard line. The official tacked on a late hit out-of-bounds and Sayre started at the Indians' 20.

The Redskins moved the ball to the eight when, on fourth-and-goal, Brown hit Dominik Mazzarese on a quick slant for the score.

Cowanesque Valley then went to Barber to slice his way through the Sayre secondary. On the third play of the drive, Huyler hit Barber for a 22-yard gain on a diving sideline snare and, two plays later, Huyler connected with Barber again. This time the play went for 48 yards as Huyler hit Barber in stride for the score.

The teams went into the half knotted at 12-12 and their play in the second seemed more indicative of their records.

Sayre opened the half with a drive into the red zone, but Andrew Hand intercepted a Brown at the six. The Indians returned the favor when Garrity intercepted a Huyler pass at the CV 25-yard line.

Sayre then turned the ball over on downs.

Cowanesque Valley dropped back to punt after failing to move the ball. The snap sailed over Thomas' head and the Redskins tackled him at the Indians' 23.

The Cowanesque defense sacked Brown twice, forcing Sayre to punt, but return man, Dallas Taaj, fumbled the ball and the Redskins recovered on the Indians' 23-yard line, but eventually turned the ball over on downs.

Cowanesque Valley eventually mounted a drive with three minutes left in the game. Huyler completed a 7-yard pass to Barber and three plays later, Barber cut around the end of the Redskin defense for a 38-yard scamper. Connor Harbst made a touchdown-saving tackle.

The Indians followed the run with a fumble for a loss of 5 five yards, a negative run by Barber, and Garrity sacked Huyler for an 11-yard loss to eventually set up the overtime drama.

"We just didn't execute at the end," an emotional Satterly added, "but they played a heck of a game. I couldn't be happier for them. I know they're sad and they're upset and I am too. That's why it's a 10-week season. It's not just four weeks, so we'll get better and they'll come back."