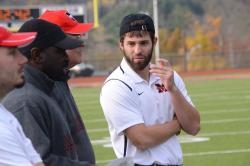 Growing up Jordan Clark knew all about the Bronze Helmet rivalry between Towanda and Wyalusing.

As a player, and then assistant coach, with Towanda there were plenty of big games with Wyalusing, and plenty of respect for what the Rams program was all about.

Now, Clark will be on the other side of that rivalry as he was approved as the next head football coach at Wyalusing during Monday's school board meeting.

"I am ecstatic, I'm blessed and humbled all at the same time," Clark said. "At such a young age, I'm really overwhelmed with emotion right now. To have a childhood dream come true, I couldn't ask for anything more."

While Clark is young, he's 27, he already has a wealth of experience.

Ever since his playing days Clark learned from coaches who had an impact on his life.

"You go all the way back to high school, I was blessed with some awesome coaches with (Ryan) Larcom, (Jamie) Wecker and (Craig) Dawsey," Clark said. Then I had the opportunity to coach with coach Wecker and learn the other side of the spectrum. Then I got to go to the collegiate level and I had a great time at Mansfield. I was honored to coach at my alma mater, and that's when I found out I really liked high school football. I like the Friday Night Lights. It's so pure."

For Clark it will be a little different at first coaching against his alma mater.

"First thing, I'm happy the game (with Towanda) will be at Wyalusing this year," Clark said. "It would be pretty tough to go into Towanda my first year, against the team I played for growing up and coached for four years. It's going to be awesome, coach Dawsey and I have had a relationship for years. I hope the Towanda fans don't take it too harsh that I'm at Wyalusing. It's an awesome rivalry and I look forward to trying to take down the Black Knights now."

Clark is excited to get started in Wyalusing and start to meet everyone.

"The tradition of Wyalusing football is outstanding," Clark said. "All the way back to Ray Raffin, I learned a lot from Karl Raffin about that. The community just takes in that football team. My coaching is going to be all about involving the community. I'm looking forward to meeting the members of the community and getting out there and playing some Ram football."

For a long time Clark has been anxious to get the chance to be a head coach, and he's excited for next season to start so he can compete with a lot of the NTL coaches like Dawsey and Jack Young and Tom Dickinson, who he has watched for years.

"It's going to be surreal when it happens," Clark said. "Hopefully I can try and develop a dynasty at Wyalusing and try and look up to those guys. Being part of the fraternity of coaches is going to be awesome. At my young age, it's a blessing I get to develop young and hopefully stay around a while."

Ever since he first went to a football game, Clark has known he wanted to be involved with the sport.

"For me, I love football, it was the first love," Clark said. "My dad took me to my first football game, I'll never forget in 1996 to watch Towanda play Jersey Shore. Ever since, Towanda has been a part of my life. I want to develop a rapport with the kids and I want to develop them into student athletes."

For Clark the coaches he had are people who are still involved in his life, and he wants that when he is coaching.

"I owe a lot to coach Dawsey," Clark said. "He's a great mentor and I actually got into teaching because of them (Dawsey, Larcom and Wecker). They are like my three other dads, or uncles. That trust and relationship is there. It wasn't just with me ,it is for all the guys that played for them. We weren't just student athletes, not just players to them, but people. That kind of attitude is what I want to bring to Wyalusing. I want these kids to know I love them. I haven't met them yet, but I will soon, and I love them."

Getting a chance to coach at Mansfield last year gave Clark a little different perspective on the sport.

"I worked under coach Rick Novak, who has coached at Navy before, and also coach Evans, who was at St. John Fisher, a powerhouse Division 3 football team," Clark said. "I learned a great deal about how to deal with the little things from them. I owe these guys more than I can tell. They really set me up professionally. I have always been an x's and o's guy, but they really set me up to be a professional."

Being a younger coach is something that Clark thinks can have some benefits with helping him to relate to high school players.

"I hope so, I think so," Clark said. "I always had a great rapport with the kids when I coached at Towanda and Mansfield. I have always been able to relate with kids. Being in the same generation as them pretty much kind of helps."

Right now Clark is ready to get out there and get the season started.

"I think we are at Sayre first game, I couldn't be more excited," Clark said. "It's going to be a little nerve wracking, we are going to have our ups and downs. I am ready to get guys in the weight room tomorrow. I am ready to be the man under the Friday Night Lights."

While Clark has learned from a lot of coaches over the years, he has his own style and way he will do things.