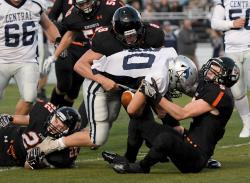 TOWANDA — The Black Knights of Towanda suffered their first loss of the 2017 season at the hands of the visiting Central Columbia Blue Jays by a final score of 35-6 on Friday night.

"They're just good and they're fast," stated Towanda head coach Craig Dawsey. "They're a good team and we knew that coming into the game."

"I'm not going to make excuses, they're just a good football team," he added.

Heading into Friday's game, Dawsey knew that the Knights were in for a tough one. He remarked that he wanted his players to play hard for four-quarters.

"I thought we played as hard as we possibly could," said Dawsey. "Sometimes you just get your butt whipped."

The Blue Jays were led by junior running back Isaac Gensemer who dashed the Black Knights' defense for 232 yards on 20 carries and two scores.

Towanda's lone score of the football game came from its defense, as Luke Tama anticipated a Blue Jay screen pass, intercepting the football and taking it 79 yards for the touchdown.

It took Central Columbia just one play from scrimmage to reach the end zone for the first time on the evening.

After forcing the Black Knights to a three-and-out on the opening drive of the game, Gensemer took the handoff from quarterback Trae Devlin, hit the edge of the line and was off to the races.

Towanda was unable to capitalize on their following possession but did hold Central Columbia to a field goal attempt, which was missed to the left.

Central Columbia would strike again in the first quarter, again behind the legs of Gensemer.

For his second touchdown, Gensemer took the handoff, broke a few tackles before spinning off of the final defender en route to the end zone.

With a completed point-after attempt, the Blue Jays led the Black Knights 14-0 at the end of the first quarter.

Towanda would then look like they had some momentum on their side as they drove their way to the Blue Jays' 9-yard line. However, their efforts would be dashed as Kunkle tossed an interception in the end zone.

Again, Towanda would look like they might have been able to climb back into the ball game after forcing the Blue Jays to a three-and-out and driving their way to the Blue Jays' 6-yard line.

This time, the Knights opted for a field goal. A low-snap would see Kunkle picking the ball off the ground and attempting to get into the end zone but would be cut down short by Central Columbia.

The Blue Jays took a 14-0 lead into the locker room at halftime.

Just as the game had begun, it took Central Columbia one play from scrimmage to find the end zone in the second half.

Devlin dropped back, eluded a few wannabe tacklers before finding a wide open Matthew Fulton downfield who went 65 yards for the score.

The Blue Jays would see their lead extended to 28-0 in the third quarter as Ky Seesholtz pounded the ball in from the 1-yard line.

The Black Knights' lone score of the evening would come early in the fourth quarter as Tama would intercept a Devlin screen pass and take it 79 yards in for the touchdown. The point after attempt was failed to be converted and the Knights saw themselves trailing 28-6.

Central Columbia would take any remaining hope out of Towanda's sails with a 1-yard touchdown run response by Justin Thivierge on the very next drive.

Both teams would then exchange a few possessions en route to the game ending with a final score of 35-6 in favor of the Blue Jays.

Towanda was led offensively by quarterback Tanner Kunkle as he went 11-for-21 passing for 85 yards. Running back Zane Neubert carried the ball 16 times for 39 yards.

The Black Knights will travel to take on the North-Penn Mansfield Panthers next Friday evening.