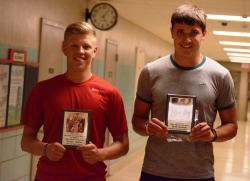 When it came to picking the top male athlete of the year two names stood out.

One plays in New York. One in Pennsylvania, but both three-sport standouts had years to remember, and they now share The Daily & Sunday Review Male Athlete of the Year honors.

However, it was during basketball season that both stood out the most.

"I was happy, I feel like I had some expectations to meet my junior year and I'm happy with the way the year went," Burleigh said. "I'm really happy to get this recognition and I'm glad that Mr. Fees and The Daily Review gives this out."

Bodine was really happy to get recognized for the work he put in this year.

"It's an honor," he said. "It's kind of surprising. I guess all the work in the offseason has paid off."

The school year started off for both athletes in football season.

For Bodine it was a great way to start the school year.

"I surprisingly had a great season in football," Bodine said. "I can't thank Gavin (Judson) enough for throwing me the football a lot and trusting me to catch it."

After Judson took over as quarterback midway through the season Bodine saw the change in the way the offense was working.

"I feel like if we had played some of the teams we played early in the year, and taken a loss to, later in the year we would have beaten them," Bodine said. "Gavin kind of got in a rhythm with us, I think we were playing better at the end."

While Burleigh had a strong season at quarterback, he hoped for even more things this year.

"I was a little disappointed with football to be honest," he said. "The way basketball finished, I feel it made up for football."

Basketball season was something that Burleigh won't soon forget, culminating in a District 4 title for the Tigers.

"It was real special to finish up with a district championship," Burleigh said. "Our team was hoping to achieve that milestone for a long time."

And, when the year ended Burleigh earned a number of honors.

He was The Daily & Sunday Review All-Region Boys' Basketball Player of the Year for a second straight season, and he earned first-team all-state honors.

"That was an awesome feeling," Burleigh said of getting first team all-state. "I was hoping to get all-state and first team kind of surprised me a bit and I couldn't be more honored."

For Bodine the postseason ended just short of a sectional title, as the Wolverines fell in the Section IV, Class B final, but the Waverly star knows it was still a great year.

"It ended a little short there in the section finals," Bodine said. "But, I'm proud of the whole team. This award is really kind of shared with everybody.

One of the moments that Bodine will never forget was scoring 45 points, with a Section IV record 11 three-pointers, in a win at Chenango Forks.

"I'll never forget that game, that's one of those nights where everything I shot went in," Bodine said.

Burleigh finished up his senior year with another season of track and field, while Bodine joined the baseball team for the first time in high school.

"My friend Brendyn Stillman is the one that really talked me into playing and coach (Taylor) Skerpon," Bodine said. "I don't regret playing baseball this year at all. I loved it, playing with all the guys was so fun."

Bodine never imagined that he would wind up as the starting shortstop for Waverly in his first season on varsity.

"When coach (Kyle) McDuffee told me I was starting, I kind of chuckled, it was a big surprise," said Bodine, who was the All-Region Baseball co-newcomer of the year.

Bodine knows that his teammates played a big role in all his success this year and in his career.

"I can't thank my teammates enough," he said.

Bodine is now ready to see what college basketball is like as he prepares to play for Alfred.

For Burleigh, college will be joining his brother Bo at Bucknell University.

"I am going to attend Bucknell and try and be a practice player on the basketball team," Burleigh said.

He knows that walking on to a Division I program is tough, but he also knows Bucknell is the right place for him.

"It's real difficult, we will see what happens," Burleigh said. "I love the scenery, I love the college, I like a lot of the people there, it should be a great time.

"I didn't want to go that far, because I do get along with my parents really well, so I was hoping to stay kind of close. I look forward to coming back and watch a lot of (his brothers) Brent's games and Brody's as well."