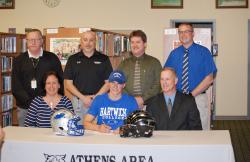 Last season, Kerrick was part of a Wildcat team that finished the 2016 campaign with a 7-4 record.

Kerrick had many reasons as to why he chose Hartwick to be his home for the next four years.

"Hartwick has criminal justice," said Kerrick. "It was beautiful, the coaching staff and the facilities were beautiful. It was just like home and it had football so that makes it ten times better."

The senior signed to play punter for the Hawks, a roll he didn't the entirety of the season last fall, but Kerrick could also see some playing time at receiver.

Kerrick knows that going from the high school to playing collegiately will be a challenge, but he's willing to meet the challenge head on.

"Have to go ten times harder, stronger ,faster, definitely have to punt further and longer, and have to work every day and get better at it."

In order to see playing time, Kerrick knows it's going to take a lot of hard work. He's getting a head start on it.

"I'm punting every day," Kerrick said. "I'm lifting, I have a strength and conditioning class that I do, running, all that."

Hartwick, a Division III program, competes in the Empire 8 conference. The Hawks ended the 2016 season with a 2-8 record, with three losses coming by just three points.