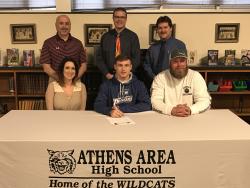 Athens' star wide receiver, defensive back, kick and punt returner Kalen Keathley will be taking his talents to Marietta College in Ohio in the fall. Keathley is excited about football, but he's just as excited about Marietta's academics where he will be majoring in petroleum engineering.

"I want to major in petroleum engineering," Keathley said. "It's a pretty rare major, I think maybe 30 schools have it, total. Marietta is one of the best schools for that major so it was pretty easy to decide."

Marietta's coaches already have plans in place for Keathley.

"My coaches want me to make plays, be a playmaker. That's what they see in me. I'll be playing in different receiver spots and I'll also be returning kicks and punts. Kick returns are my favorite," Keathley said with a grin. "I'm just excited to get better. One of my favorite things is to look back and see how much progress I've made. I'm looking forward to playing better competition, I always play better when I'm up against harder competition. I'm excited to see how far I can go and how much I can do."

Keathley will look back at his time at Athens fondly.

"My favorite part from Athens was two-a-day practices. They're definitely my favorite. Maybe my freshman or sophomore year on coach Young's birthday we took his cart and lifted it up into the stands so he couldn't use it, we played pranks and jokes on each other all of the time. It was a lot of fun." Keathley said while laughing.

Athens' head coach Jack Young will look back fondly on his time Kalen as well.

"Kalen's left a big statbook," coach Young said. "A lot of big plays, kickoff returns, punt returns, timely interceptions, big plays when Athens football needed it the most. From seventh, eighth grade, Kalen hasn't backed down from a challenge. He has the ability to make tons of plays all over the field.

"We'll miss him that's for sure. Kalen wasn't a big rah-rah guy, but he was definitely a leader. When guys needed a little bit of tail-chewing he did it, and when it was time for him to lead by example, he did that too."