Wyalusing's Behrend to play for Misericordia. 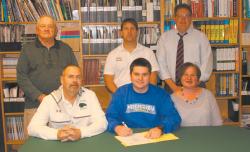 WYALUSING — His high school career might be over, but Wyalusing's Skyler Behrend's football career is not.

The Ram will continue to lace them up for Misericordia University just down the road in Dallas starting next Autumn.

"It just felt like the right academically fit school for me," he explained. "And the team environment was really nice when I went down there for my visits."

Behrend liked the fact that it's not too far from home.

"The distance away was definitely a factor," he said. "Having my family being able to come down to the games when I'm down there."

The closeness of the team atmosphere was another big selling point for him.

"It was like a family almost," Behrend remarked. "Everyone was rallying and supporting each other. Even though its a new program, it really felt like a home."

Misericordia started their program back in 2012 and are still finding their feet. They've won a game each season since 2013, but have yet to win two in one fall.

Behrend sees that as an opportunity more than a hindrance.

"I've talked with some other kids coming into the program and we're pretty excited that we can build our own pathway," he said.

But don't expect to see him too far from his comfort zone in the trenches, either at center or tackle.

"(The coach) said they're both needed positions on the team," explained Behrend. "I will probably work out in both positions and see what works best down there."

He plans on studying Government Law and National Security.