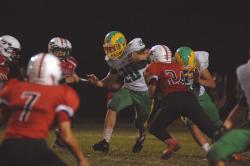 MONTGOMERY — Montgomery led 7-0 but Wyalusing rattled off 26 straight points as they pulled away to win 26-7 in NTL football action Friday.

Ryan Kipp had 136 yards rushing and two touchdowns to lead the Rams who held Montgomery to 163 total yards.

The Red Raiders struck first when Jensen Drick got a 20-yard pass from Brayden Strouse to put them up 7-0 in the first quarter.

Later in the first Kipp ran one in from 10 yards out. The 2-point conversion was no good and Montgomery held on to a 1-point lead.

In the second quarter Wyalusing scored through the air as Calvin Burke hit Will Martin for a 21-yard touchdown strike. The 2-point conversion failed again but the Rams now led 12-7 at the half.

Wyalusing then scored twice in the third quarter.

Clark added 71 yards on the ground on 14 carries while Derek Frederick had five touches for 32 yards.

Burke was 2-for-2 for 38 yards with Kipp his other target, who caught a pass for seven yards.

Kipp also led the team in tackles with six while Frederick had an interception.