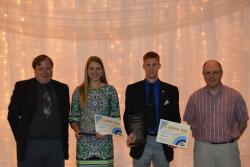 SAYRE — Of 23 students from 13 school districts, only two are chosen as the female and male NTL Athletes of the Year.

In 2016, those winners are Wellsboro's Sarah Ingerick and Northeast Bradford's Levi Upham.

"I was really honored to be nominated," Ingerick said.

Ingerick, who plans to attend Gannon University where she will major in biomedical engineering while taking to the softball diamond again, was selected over 11 other standout student athletes and said being recognized for her work on and off the field (both softball and soccer) and basketball court is an honor.

"I worked hard all four years and it's sort of nice to be recognized in front of my family and my coach," she said. "It's pretty great."

Upham, whose future plans include attending either Penn State or Virginia Tech to major in engineering and ultimately attend the Naval Academy to become a Naval officer, said he was unaware that the NTL Athlete of the Year award existed.

"When (fellow Northeast Bradford student athlete) Lydia (Werner) and I were chosen, I was excited and hopeful," he said. "And here we are."

Upham's dedication on the track, cross country course, and basketball court earned him the award among 10 other student athletes with strong athletic and academic resumes.

"I'm very thankful (for the award)," he said. "You work very hard and it's nice to get some recognition."

He said earning this award helps "boost the confidence" when looking forward to college and the future.

"It helps you prove to yourself you can be successful in the big world," he said.

Ingerick said she's always been motivated to work hard for her success, but said the award will likely increase her motivation as she takes her talents, both academic and athletic, to the college level.

Similar to Upham, many people in the NTL area were unaware of the award, which led NTL athletic directors to partner with The Daily Review and Morning Times to host the first NTL Athlete of the Year banquet at the Best Western Grand Victorian Inn in Sayre.

"I knew they had a great idea," Daily Review General Manager Dave Barry said of the banquet idea.

Barry worked with staff from the Review and Times to produce an NTL Athlete of the Year program that is available at various stores all over the NTL region.

"It's been a great experience working with them," Barry said.

He said the plan is to build on this event every year to make sure student athletes are recognized for their efforts on and off the field.

Guest speaker and Sayre Area School District Athletic Director Dana Twigg said the goal of the banquet is to ensure "we are acknowledging the good kids in our league."

"We are acknowledging our athletes that are the ones that gave of themselves both in the classroom and on the playing fields and in life in general," he said.