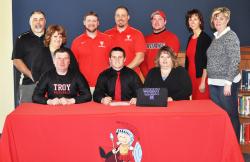 In high school Kyle Schucker helped turn the Troy football team into one of the best teams around.

He helped the Trojans become perennial league powers the past four years and as a junior he was a key member of the school's District 4, Class AA District Championship team.

Now the Troy linebacker is going to play for the ultimate winning program in Division III college football — Mount Union.

Mount Union was 15-0 last year and has won 12 National Championships in their history.

"On my visit I fell in love with the campus and they had my degree as well," Schucker said. "They are a very good program with my degree and the athletics is outstanding, especially football."

Schucker, who plans to major in civil engineering, is excited to get to work and try and make an impact at the next level.

"It's going to be outstanding, I'm very excited," he said. "I can't wait to start lifting in their program and see what it takes to be a national champ.

"I'm very excited to try and get a national championship ring hopefully."

For Schucker there were a few schools he was considering before making his choice.

For Schucker it was clear that Mount Union was the choice.

"They are national champs, their facilities were very nice and the coaching staff, I just felt like I fit in," he said. "I'm very excited and can't wait to continue my career onto the next level."

Schucker said they are looking at him as a linebacker or possibly defensive end, and he knows there is stuff he needs to work on.

"I haven't gotten their workout plan yet, but I'm mostly working on bulking up and on speed," he said.

There were parts of his game that Schucker knows the coaches liked.

"They liked the physical and the nasty aspect of it," he said. "The nasty attitude I had at linebacker."

While Schucker was a star in high school, he knows he's taking on a tough task going to a national championship program.

"I didn't want it to be easy, it's going to be a definite challenge for me and I'm excited to take that on," Schucker said.

And, he knows he's going to have to work to make an impact at that level.

Mount Union has a JV program and Schucker said that might be a possibility for his freshman year.

"I don't know if they redshirt, but they have a JV program," he said. "Even if I'm not starting I'll get reps in JV and they have an eight to 10 game schedule."

And, the goal is to work his way into the lineup of a National Championship team.

"Learn the system and compete for varsity," he said