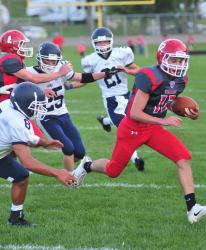 TROY — Troy moved to 2-0 on the season with a 48-14 thumping of the visiting Muncy Indians at Alparon Park Friday. The Trojans were led by junior quarterback Clark Jackson who rushed for 187 yards and four touchdowns while completing 5-8 passing attempts including an 18 yard score.

"I felt like we took a big step forward tonight," said head coach Jim Smith. "We were much cleaner in our execution from last week".

The Trojan ground attack was impressive, with no less than 10 players sharing the load, as the team rushed 41 times for 386 yards.

It didn't take long for the Trojans to get started, as Clark Jackson took the second play from scrimmage and raced 58 yards for the score. Seldon Rogers added the extra point, and Troy led 7-0 only 18 seconds into the contest.

Following a quick 3-and-out, the Trojans started their second possession on their 43 yard line. They would only need 6 plays to light the scoreboard again, as Jackson went in from six yards out for his second score on the night. Rogers again added the PAT, and Troy led 14-0 at the 8:12 mark.

Muncy would get untracked, on their next series, taking advantage of a pass interference penalty while mixing in short passes and runs, as they moved from their own 31 to the Trojan 3 yard line in 10 plays. From there, Gerard Alpaugh plowed in for the score, and Chris Titman hit the extra point to make it 14-7 with 3:57 left in the opening stanza. Troy would answer right back, returning the ensuing kickoff to the Muncy 26, where they needed only 6 plays to extend the lead. This time Jackson raced in from four yards out and Rogers' kick put them back on top 21-7.

The teams would exchange punts before Muncy put together another nice drive, relying on their run game to move 76 yards in nine plays. Alpaugh would again cap the drive, this time rushing in from 12 yards out. Titman's PAT made it 21-14 with only 2:24 left in the half. But the Trojans were not done, as they needed just over a minute for their next scoring drive. Highlighted by a 43-yard catch and run by Ja Wallace, Troy would cover 60 yards in just four plays, capped by Zach Zimmerman's 2-yard burst. Rogers' kick was again true, and Troy would take a 28-14 lead into the locker room.

They would pick up where they left off, as their first possession of the second half also resulted in points. Three Jackson option keep runs would set them up at their own 45, where Wallace raced around left end 55 yards for the score. Rogers' extra point extended the lead to 35-14 with 7:29 left in the third.

Troy would score once more in the 3rd quarter, as Jackson carried it in for his 4th score from seven yards out. A failed snap on the extra point made the advantage 41-14.

The Trojans would close out the scoring with 7:35 left in the game, as Calvin Rogers took a Jackson pass and raced in from 18 yards out. Seldon Rogers would add his sixth and final PAT to make the final 48-14.

The Trojans will host Jersey Shore next Friday night.