Troy pounds out win over Canton to retain Old Shoe. 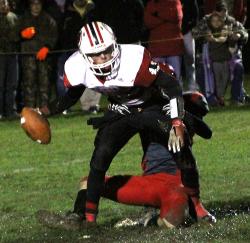 TROY — In an old fashioned slug fest, the Troy Trojans won the 62nd version of the "Old Shoe" game by a 16-0 score over their rival Canton Warriors at a muddy Alparon Park last night.

"Im proud of our kids. Canton played a whale of a game, but it came down to a couple big plays and we were able to come out on top," said a happy Troy head coach Jim Smith afterward.

The two teams traded punches all night, with both offenses finding some success, but it was both defenses that employed a "bend but don't break" game plan that kept the game scoreless until the third quarter. In the end, sophomore kicker Seldon Rogers' 34-yard field goal followed by two short TD runs by sophomore fullback Tyler Williams that would bring the Trojans their fifth straight "Old Shoe" win.

In the first quarter, the Trojans moved to the Canton 28 before turning the ball over on downs. The Warriors then began riding workhorse RB Gavin Hoffman with seven straight carries to the Troy 9-yard line. But the Trojan defense stiffened and forced an incomplete pass on 4th-and-12 from the 11.

Canton would threaten again late in the first half, but two solid defensive plays by cornerback Clark Jackson would keep the game scoreless, as he broke up two passes to intended receivers in the end zone.

The Trojans received the second half kick, and went to work running their option offense. Tyler Williams found success on the fullback dive, plowing for gains of six, nine, and four yards on the drive. Facing 4th and 6 from the 11, Coach Smith decided to go for the 29 yard field goal. But an offside penalty pushed the ball back five yards, and Rogers kick from 34 yards out was good, putting Troy up 3-0 with 4:41 left in the third.

The teams traded punts before Troy's Bailey Cohick busted loose for a 38 yard run down the right side line. Four plays later, Tyler Williams plowed into the end zone from 5 yards out. The extra point kick failed, and Troy extended the lead to 9-0 at 5:19 left.

Canton was forced to throw on every down with time running out, and following a 4th-and-10 incompletion, the Trojans took over on the 12 yard line. From there, they would need only three plays to close out the scoring, as Williams again went up the middle from six yards out for his second TD. Rogers' PAT was good, and at 1:43 the final was set 16-0.

The Trojans end their season at 4-6, while Canton looks forward to continuing their season in the first round of district IV playoffs next week against top seed Sayre.