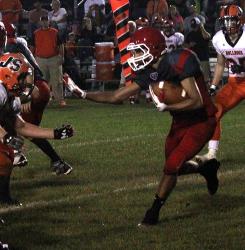 TROY — The Jersey Shore Bulldogs used a proficient passing attack and a quick, aggressive defense to overpower the Troy Trojans by a score of 52-7 at Alparon Park last night.

Bulldog Junior QB Elijah Shemory passed for 279 yards and two touchdowns, while their relentless defense held the Trojans to just 90 yards of total offense on the night.

"We got beat in every aspect of the game tonight," said Troy head coach Jim Smith. "We were never able to get anything established on offense. We need to learn from this experience and get better."

Jersey Shore received the opening kickoff and quickly marched 61 yards in 8 plays. Using a no-huddle hurry up style offense, they mixed runs and passes to the Trojan 18, where on 3rd and 15 Shemory hit Hunter Frantz in the corner of the end zone for the score. Cameron Griffin missed the PAT, and the Bulldogs led 6-0 at 9:22.

Ja Wallace brought the Troy crowd to its feet as he took the ensuing kickoff and raced up the middle of the field 80 yards for the score. Seldon Rogers hit the extra point, and Troy took what would be their only lead of the night.

The Bulldogs responded by covering 63 yards in only six plays, keyed by two long completions from Shemory to Frantz. Max Mason would bust in from 2 yards out, and the 2 point pass from Shemory to Todd Sanford made it 14-7 with 7:48 left.

Troy's next two possessions would net them negative 24 yards and an interception, respectively. Jersey Shore took advantage of the turnover, covering 34 yards in six plays capped off by another Mason TD run, this time from a yard out. Cameron Griffin hit the PAT, and it was 21-7 with 2:52 left.

Following a Clark Jackson fumble on the next series, the Bulldogs would again convert, this time on a 14-yard run by Jarett Guthrie. The extra point failed and the lead was 27-7.

The teams traded possessions before Guthrie busted loose up the middle for a 75-yard jaunt to the Troy 5. He would score two plays later, and a failed 2 point try would increase the lead to 33-7.

Jersey Shore's final score of the half came on a 15-yard connection from Shemory to Frantz. The run failed and they took a 39-7 lead into the locker room. Their defensive dominance reflected in the halftime stats, as they held Troy to 7 yards rushing and only 1 yard passing for the first 24 minutes.

To start the second half, both teams had some success moving the ball between the 20 yard lines, but neither was able to score in the third quarter. The Bulldogs would put together a 77 yard drive to start the 4th quarter, capped with a 6 yard QB keep by Shemory. Griffin's PAT made it 46-7 at 8:28 left.

Frantz would intercept Clark Jackson to set up Chase Braim's 7-yard burst to finish the scoring at 52-7.

"I was happy with our overall team effort tonight," said Bulldog head coach Tom Gravish. "We got a couple guys back healthy which helped us. I give credit to Troy, they played hard, but defensively, we attacked and gave good effort."

The Trojans at 2-1 will host Athens next Friday at Alparon Park.