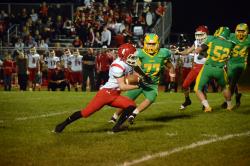 "I'm so proud of these kids, they've faced so much adversity these past few weeks, but they keep working, they keep improving," said Trojan head coach Jim Smith afterward.

Troy opened the game with fireworks, as speedster Ja Wallace took the opening kickoff straight up the middle and raced 85 yards for the score. Seldon Rogers added the PAT, and only 14 seconds into the contest, Troy led 7-0.

Wyalusing would return the favor, driving 55 yards in nine plays, capped by Ryan Kipp's 1-yard plunge. The 2-point run failed, and the lead was cut to 7-6.

Troy again had success moving the ball, driving 47 yards in 10 plays, before Tyler Williams was dropped for a 2-yard loss on 4th and 1 from the Ram 7.

The defenses would then stiffen, each team trading punts before the Rams offensive weapon Derek Frederick began to show his talent. Starting on their 33, Frederick would rip off runs of 35 and 29 yards, before Kipp added his second TD of the night from 3 yards out. Kipp also ran in the 2-point try, and the Rams led 14-7.

Following another Troy punt, Frederick continued to shine, flashing for runs of 20, 5, and 7 yards before scoring from 10 yards out. The 2-point run failed, and Wyalusing took a comfortable 20-7 lead into the locker room.

"We decided at halftime to get back to what Troy football does well, establish the line of scrimmage and run the football," said Coach Smith.

But first, the Trojan defense would come up with a stop and change the momentum. The Rams took the second half kickoff and continued where they left off, driving 52 yards in six plays. But with 1st and 10 at the Troy 16, the defense would draw a line in the sand, stopping the potent Ram attack and taking over at the 19. As promised, the Trojans switched to power football, pounding the middle of the defense, as they drove 81 yards in 14 plays, with Tyler Williams banging in from 2 yards out. Rogers' PAT was short, and the lead was cut to 20-13 at 1:14.

The teams would then trade punts, before freshman middle linebacker Jack Imbt forced and recovered a Frederick fumble. The offense needed only four plays to cover 35 yards, as Nate Martin scored from 3 yards out. The Trojan coaching staff decided to go for the lead, as Clark Jackson hit Ja Wallace for the 2-point pass and the come-from-behind 21-20 win.

The Trojans host Towanda next week while Wyalusing will host Athens.