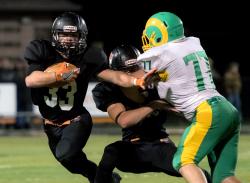 TOWANDA — Just about the only thing that could stop The Black Knights on Friday night was themselves. Of their nine possessions, five ended in a touchdown and four ended in a turnover, but those five touchdowns were plenty to defeat the Wyalusing Rams in the 2016 Bronze Helmet game. With this 34-0 win, Towanda clinched a spot in the 2016 PIAA District Four playoffs. They will most-likely be taking on Southern Columbia in round one.

Towanda started their scoring with a Tanner Kunkle play-action pass to tight end Joe Koss. The play action was set up by Keegan Kisner running for consistent yardage all-night. He finished the game with 27 carries for 168 yards and one touchdown.

After a few turnovers, Towanda got back on their feet on a third-and-three, just before the end of the first half. Tanner Kunkle threw an out pattern to Griffon Sites, but instead of going out of bounds like the entire Towanda sideline was yelling at him to do, he cut up field, juked one Wyalusing defender and spun away from another, scampered up the sideline and dove into the endzone to put Towanda up 13-0 before the half. Sites would finish the night with five carries for 49 yards and one catch for 34 yards and one touchdown.

After the half, Wyalusing came out determined to make some plays and they did. After a three-and-out by the Towanda offense, Towanda's punt was blocked by Wyalusing's Ryan Kipp to give them the ball at Towanda's 27 yard-line. Towanda's defense would prove their reputation by forcing a turnover on downs to give the ball back to their offense.

Before the end of the third quarter, Kunkle would strike again for Towanda. After faking an option pitch to Kisner, Kunkle shoveled the ball inside to Dalton Potter who cut upfield for the score.

On Wyalusing's next possession, Towanda's Todd Koss would sack Wyalusing's Calvin Burke for the second time of the night. This time it would force a fumble that Towanda recovered. Keegan Kisner then scored on Towanda's possession on a 15-yard dive play. Kunkle and Potter connected on a shovel play again for Towanda's final score after Kisner intercepted an errant Burke pass.

For Towanda, Tanner Kunkle finished 6-11 passing for 102 yards, four touchdowns, one two-point conversion and one carry for two yards. Todd Koss carried the ball three times for seven yards and had two sacks and one forced fumble on defense. Dalton Potter ran the ball twice for seven yards and caught five passes for 49 yards, two touchdowns and one two-point conversion. Luke Tama added one catch for 17 yards, Jyshaire Robinson tallied seven carries for 39 yards and Dane Zotter had one carry for nine yards.

For Wyalusing, Calvin Burke finished three of 12 passing for 27 yards, one interception and one fumble lost. Derek Fredrick carried the ball nine times for 25 yards, caught one pass for nine yards and was 0-for-1 with one interception passing. Derrick Clark tallied seven carries for 24 yards, Ryan Kipp had five carries for 20 yards and one catch for five yards, and Bryton Barna finished with one catch for 13 yards.