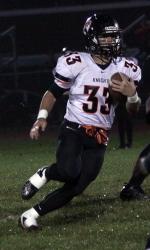 CANTON — The Towanda Black Knights controlled both sides of the ball on their way to a 31-0 shutout win over the host Canton Warriors at Miller Moyer Field last night. In a game played in a steady mist, the Black Knights used a steady, balanced offensive attack and an aggressive defense to record just their second victory of the season.

Keegan Kisner was a workhorse, attacking the center of the Warrior defense for 149 yards on 26 carries, while freshman QB Tanner Kunkle threw for 95 yards and three touchdowns on the night.

Defensively the Black Knights held the Warriors to just 36 yards in the game, including just 10 yards on the ground.

The Black Knights took the opening kickoff and needed only five plays to cover 50 yards, with Griffin Sites taking an inside trap play 16 yards for the score. The two point pass failed, and Towanda led 6-0 at 9:47.

Canton's Levi Giaotti excited the home crowd with a 60-yard kick return to the Knight 25. But four straight negative offensive plays gave the ball back to Towanda at the 40. From there, they would grind out a 13-play, 60-yard drive capped by a Kunkle to Luke Tama 8-yard scoring strike. Again the two point pass failed, and the lead was now 12-0.

Following a 3-and-out, the Knights struck quickly, as on first down Griffin Sites outraced the Warrior defense for a 66-yard TD run. Again the two point conversion failed, and the lead was now 18-0.

On Canton's next possession, QB Ridge Moore got hit and fumbled a pitch, giving the ball back at their own 24. From there, the Kunkle to Tama connection struck again, this time from first and 10 from the 13. The two point conversion again failed, and the Knights took a 24-0 lead into the half.

The third quarter saw both teams trade punts, before the Knights put together their final scoring drive. Six rushes by Kisner took them from their 41 to the Canton 12, where Kunkle hit Sites for his third and final TD pass on the night.

Sites ran for 107 yards and two scores for Towanda and Dalton Potter had six catches for 41 yards and four carries for 21 yards. Tama had four catches for 22 yards in the game.

The Black Knights improved to 2-4 on the season, while the loss dropped Canton to 2-4.