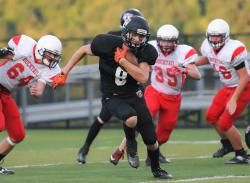 TOWANDA — Towanda ran away from Bucktail 51-12 to win their home opener in NTL football action Friday.

Keegan Kisner had 139 yards rushing and three touchdowns on 13 carries while Griffin Sites had 76 yards and a score on three touches.

"He did a great job," Towanda coach Craig Dawsey said about Kisner. "All the kids did really well. We didn't execute well last week. We had to execute on both sides of the ball and I think we did that much better."

The Black Knights had three touchdowns in the first quarter.

Sites then went 60 yards to paydirt for a score. Ferris hit the point after to make it 14-0 with 4:10 left in the opening quarter.

Kisner then scored with 48 seconds left on an 18-yard run. The extra point was no good but the Knights led 20-0.

Towanda would add two more touchdowns in the second quarter.

They would strike through the air on the first as Dalton Potter hit Luke Tama for a 40-yard strike to make it 26-0 with 5:22 left in the half.

Early in the fourth, Potter ran in a touchdown from 10 yards out to make it 39-0 after the Ferris extra point less than a minute in.

The Bucks got on the scoreboard later in the third as Blake Cannon ran it in from three yards out to cut it to 39-6.

Bucktail would score late as Richard Perry hit Logan Long on a 73-yard passing strike to make it a 51-12 final.

Dawsey felt being at home helped.

"It was huge," he said. "Towanda kids have always played well at home and I think it's a huge advantage."

Potter had 51 yards on four carries while Brett Crispell had 46 yards rushing on seven carries.

Defensive lineman John Perry had an interception — a moment that helped the team grow, according to Dawsey.

"(It) really brought the whole team together," he remarked. "I think overall the entire defensive unit played very well and much more disciplined than last week at Mahanoy."

It was also a big moment for Dawsey as it was his first home game since returning as coach.

Cannon had 16 yards on eight carries to lead Bucktail. Long had two receptions for 83 yards.

The Black Knights will be back on the road to Central Columbia next Friday.