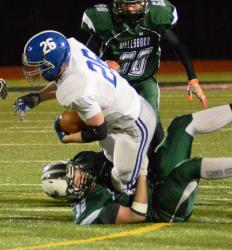 MANSFIELD — One for the ages? Game of the year? Or maybe just WOW! In a seesaw battle that came down to the last second, South Williamsport edged Wellsboro 28-24 in the district semi-final game.

With just three seconds left on the clock, quarterback A.J. Flick scored on a naked bootleg for the win, sending heartbreak through the homestanding Wellsboro fans and the players kneeling on the field.

Not finished, the Hornets took the kick and Alex Kozuhowski returned it to about the 30 before being engulfed by Mountaineer tacklers. Somehow, Kozuhowski lateraled the ball and Chase Moser caught it on a hop and raced down the sidelines unimpeded before a referee's whistle blew the play dead due to forward progress. Heartbreak again for Hornet fans.

Trailing 14-7 at the half, the Green Hornets received the kick and took over at their own 34-yard line. After two short runs, Quinn Henry, who had missed two series in the first half with an ankle injury, raced 51 yards breaking some Mountaineer ankles along the way. On third-and-six, Henry found Chase Moser in the end zone for a nine-yarder to tie the game after a Nic Ingerick extra point.

South Williamsport answered with a drive featuring Ashton Martin, who had replaced the Mountaineer workhorse Gideon Green. Suffering an ankle injury in the second quarter, Green did not return, but Martin kept the Mountaineer offense in high gear.

Martin carried the ball five times for 43 yards to start the series. The big blow came on his fifth carry, an 11-yard gain, that resulted in Henry leaving the game permanently with a hand injury.

After quarterback A.J. Flick loss four yards, the Hornets received a personal foul call that gave South the ball on the Wellsboro 16-yard line. Three plays later Martin raced into the end zone from seven yards for the score with 4:50 left to play in the third. Kyle Betz added the PAT.

The next two series were dismal for both teams. New quarterback Brandon Lamphier tossed up a weak pass that Hunter Finn intercepted. After the Hornet defense stopped the Mountaineers, they had great field position after a nine-yard punt.

Following a holding call, Lamphier faced a first-and-20 at their own 33, but totally redeemed himself with a 67-yard touchdown strike to Kozuhowski to tie the game with 39 seconds left in the third.

Ashton Martin sped up the middle, returning the kickoff, but tried to leap over players at the 45. It works in the NFL, but is not legal in high school football. Assessed a 15 yard penalty, South Williamsport took over on their 30. After three runs by Martin for nine yards and a false start, the Mountaineers punted.

The Hornets then, behind Lamphier, put together a scoring drive starting on their 20. After a 10-yard run by Moser, Lamphier connected with Dalton Prough for 37 yards. It appeared that the South defender had an interception, but Prough skied over him to making the catch. Four plays later, facing a fourth-and-six, the Lamphier to Prough connection came through again for 20 yards to the eight.

Now facing a fourth-and-goal at the six, the Hornets, who had been having trouble with the kicking game all season, sent out their field-goal unit. Ingerick came through with a 23-yard field goal for Wellsboro's first lead of the game with 4:27 left.

Receiving the kick, South Williamsport averted disaster as Martin dropped the ball but recovered it on his own 32. Martin powered for 11 yards on the next four plays before Flick hit Rion Withers for 14 yards. After a facemask call and a five-yard gain by Flick, the Mountaineer quarterback hit Withers for six yards with 40.6 left at the Wellsboro 30.

Martin then, on a quick snap, rolled through the Hornet defense for 20 yards to the four with 31 seconds left setting up the final score three plays later.

South Williamsport opened the game with a defensive score. Henry, running left, was hit and coughed up the ball. Martin scooped up the ball and raced 45 yards for the score.

On their next possession, the Mountaineers gave Wellsboro a heavy dose of Green and Martin before Green scored from a yard out.

The Green Hornets' first score came on an 85-yard run by Henry.

Green rushed for 76 yards on 22 carries before leaving the game in the second quarter. His replacement, Martin, had 156 yards on 30 carries. Flick added 24 rushing yards and 60 through the air.