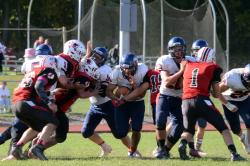 CANTON — From time to time in high school football, a large and talented group of players can end up in a single class in a program and when that class becomes seniors, there often are high expectations for that season.

That hasn't happened as often at Sayre as it has in other programs, but this year has been different. Led by that talented core of seniors, Sayre broke a tie game with a pair of fourth quarter touchdowns by Tylor Belles to top Canton 21-7 on Saturday afternoon. The win is the sixth straight for the Redskins and it clinches a winning record for just the second time since 1994.

"We came into the season expecting to do this because we have a senior-laden team that has had success throughout their football careers," said Sayre coach Steven Satterly. "Everything is clicking and it has been fun to watch. These are tough kids who have been through a lot of close games and it really shows their character and they will themselves to win."

The win also moves Sayre into the top spot in the District 4 class A playoff rankings, a game ahead of Wyalusing, which has lost two straight. A win next week, over class 4A CMVT, could very well shore up the top seed in the district playoffs for the Redskins.

As satisfying as the win for Satterly and his squad, the outcome was very much in doubt until late in the contest. Sayre turned the ball over on all three of its first half possessions, on two interceptions and a fumble, and the Redskins had four turnovers for the game as well as 100 yards in penalties.

"I can't knock our aggressiveness, but we have to understand when to do things and when not to. A few of those penalties were silly and it's on me to get them to understand that," said Satterly.

Yet, Sayre still went into halftime tied 7-7 thanks to an odd special teams play. Midway through the second quarter, with Canton leading 7-0, the Warriors punted from their own 14, but the punt was shanked and only went six yards, where it bounced at the 20 next to offensive lineman Zachery Hatch, who was blocking. He picked it up and ran it back 20 yards to tie the game.

"He has been on my case for weeks wanting to carry the ball and now he got his touchdown, so hopefully he'll get off my case," joked Satterly. "That was a great play. He turned around, the ball was there, and he ran it into the end zone."

"We've struggled with punting and have been working with a couple guys and that's one thing we need to continue working on," said Canton coach Tyler Sechrist. "That was just one of those plays where the football takes weird bounces, and you can't explain it, but sometimes you get those bounces and other times you don't."

The Redskins were forced to punt on their first three second-half possessions as Canton held tough defensively despite struggling offensively. The Warriors scored on their opening possession after receiving the opening kickoff, going 53 yards in seven plays to take the lead on Camden Smith's 18-yard touchdown reception. But senior running back James Bowman was hurt on that drive after carrying the ball four times for 26 yards, and his absence hurt Canton, which managed just five first downs and 49 yards for the remainder of the game. The Warriors ran just 12 plays in Sayre territory after the opening drive, including just four in the second half.

"It made a big difference with Bowman going out since we're so used to having him there," said Sechrist. "We just couldn't get going running the ball after that."

"We adjusted — they were hurting us off tackle so we went to a different front and we were able to contain them for the most part aside from a couple of passes," said Satterly.

Early in the fourth quarter, Sayre was finally able to put together a sustained drive. After taking possession at their own 47, a five-yard run by Belles also resulted in a 15-yard facemask penalty, putting the ball at the Canton 33. Seven plays later, including two fumbles that Sayre recovered, Belles found the end zone from three yards out to give Sayre its first lead.

On Canton's ensuing possession, Ridge Moore's pass on first down was picked off by Christopher Ray at the Sayre 40. From that point, the Redskins put together a nine-play drive capped by a Belles 11-yard touchdown run to go up by two scores. That last touchdown run put the exclamation point on another outstanding performance from Belles, who finished with 34 rushes for 198 yards, and also had two additional carries on two-point attempts, converting one and failing on the other.

Canton had two more possessions after Belles' second touchdown, but both ended in interceptions. Ray had one of them to finish with two picks in addition to his 19 rushing yards on two carries on offense.