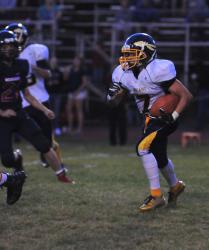 SAYRE — The Sayre Redskins kept their hopes alive at winning both the Northern Tier League Division II and reaching the District IV Class A title with a 43-0 shutout victory against Cowanesque Valley at the Lockhart Street Bowl.

The Redskins relied on their running game led by Tylor Belles who had 182 yards on 21 carries and 4 touchdowns. Sayre's defense had a strong performance holding the Indians to 121 total yards and also had an interception by Gage Carnrike.

Cowanesque Valley's quarterback Colton VinLuan was 0-6 for 0 yards including an interception. The Indians were never able to get their offense going due to the Redskins' secondary and defensive line having a big game.

The Redskins got the scoring started eight minutes into the game with a run by Christopher Ray for 18 yards. The PAT was good by James Esposito and the Redskins led 7-0.

Three minutes later, Belles had his first touchdown on a 5-yard run to make it 13-0 after the PAT was no good. With 1:13 left in the first quarter, Belles scored again on a 14 yard run to make it 19-0 and the two point conversion was good making it 21-0 Redskins. Belles kept up his strong performance with a 2-yard touchdown run with 38 seconds remaining in the first half. The Redskins converted the two-point conversion and the lead was 29-0 at half. Belles had 139 of his 182 rushing yards in the first half with three touchdowns.

The Indians had no answer for the ground game, and Belles took advantage.

Cowanesque Valley got the ball to start the second half, but was still not able to get anything going on a five-play drive that went nowhere. Sayre then had a 13-play drive capped off by a touchdown by Belles on a 5-yard run.

The two-point conversion was good by Belles and the Redskins led 37-0.

CV seemed to get some momentum going on the kick return taking it to the Redskins' 42 yard line. Once again, CV was not able to capitalize on a four-and-out and that seemed to be the last breath for the Indians.

The next possession for Sayre, Corbin Brown came in at QB and led the Redskins to a touchdown with six minutes remaining in the game. The two-point conversion was no good and that is where the score stood: at 43-0 in favor of the Redskins.

The ground game fueled Sayre to this victory.

It was an emotional day for the Redskins as well as they honored David Bidlack, who was killed in an accident last weekend.

"When they walked out, I had all I could do to keep from tearing up," remarked Satterly. "I coached David. I knew David. The kids wanted to honor him. It was good to see them come out and play as well as they're capable of with the emotion they were dealing with."