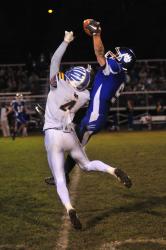 The Panthers received the opening kickoff of the game after the Eagles deferred until the second half. After starting on their own 48-yard line, the Panthers handed the ball over to the Eagles after failing to convert on a 4th and 8. The Eagles failed to move the sticks and were forced to punt after a quick three and out from their own 45-yard line on the ensuing possession.

After a Line Mountain punt, Panthers' quarterback, Brock Burleigh (SR), connected with Garrett Bickhart (SR) for a 40-yard gain on a deep post route. A few plays later, Burleigh handed off to Brendan Hill (JR), who high-stepped his way to an 18-yard touchdown run to put the Panthers up by seven in the first quarter.

The Eagles were forced to start in the shadow of their own goal line following Justice Giarth's (SR) kickoff that was down at the Eagles' 11-yard line. After a false start on first down set them back to their own 6-yard line, the Eagles drove 64 yards before Kenny Boyer (SR) turned a quarterback sneak on 4th and inches into a 30-yard touchdown run. Line Mountain trailed by one after a missed extra point.

The Panthers responded quickly as Brendon Hill took another handoff from Burleigh and turned it into a 70-yard touchdown rush as time expired in the first quarter. With the extra point, the Panthers extended their lead to 14-6.

The kickoff to start the second quarter was the answer that the Eagles needed. Giarth's kick was fielded deep in Line Mountain territory by Brenden Cregger (JR) who found a hole in the kick coverage and returned the kick to the North Penn-Mansfield 14-yard line. On the ensuing play, Kenny Boyer recorded his second rushing touchdown as he took it in for six from 14 yards out.

On the next possession, the Panthers stalled out after failing to convert on 4th and 6 from the Line Mountain 35-yard line. They quickly regained possession after Boyer was intercepted by Panthers' defensive back, Judson Wise (JR) for the first mistake by either team. The Panthers' drive would stall on third down and they would be forced to punt.

The Eagles met the same scenario after a block in the back penalty set them back inside their own 10-yard line. The Panthers were dealt excellent field position following the punt and made immediate use of it as Joel Whitteker (SR) slipped through the defensive backfield and caught a wide open Brock Burleigh pass for a 54-yard touchdown. The Panthers held on to their extended lead and entered halftime leading 21-13.

Following halftime, North Penn-Mansfield wasted no time in getting back on offense as they quickly fell on a Line Mountain fumble inside of Eagles' territory. On 3rd and 1 from the 36-yard line, Brendan Hill struck again as he rushed his way into the end zone for his third touchdown on the ground.

The Panthers took a 28-13 lead to start the third quarter.

Line Mountain looked poised to respond as Boyer led a strong drive on the ground which came to an abrupt halt as the Panthers' defense held on 4th and goal from the 2-yard line. The ensuing drive stalled out as the defenses dominated the rest of the third quarter to bring about the fourth quarter with the Panthers in control, 28-13.

The Panthers started the fourth quarter by failing to convert on 4th and 8. The Eagles responded by marching down into Panther territory where they caught a break as the Panthers' defense dropped an interception on 1st and 10 from the 21-yard line. The Eagles took advantage of their second chance as Boyer connected with Cregger for a 21-yard touchdown through the air. Following a successful two-point conversion, the Panthers' lead was cut to seven.

After North Penn-Mansfield was forced to punt on their next drive, they quickly regained possession with an interception, only to see Burleigh's pass intercepted by his opposing quarterback, Kenny Boyer. Boyer would carry the momentum over to the offense as he rushed his way to the tying score from 10 yards out. Neither team could make use of the final few minutes of regulation, and the score remained tied at 28-28 as the teams prepared for overtime.

Line Mountain wasted no time in the bonus period, as Kenny Boyer danced his way to a 10-yard touchdown on the opening play. The Panthers needed to answer but came up short on an incomplete pass on 4th and goal from the 10-yard line.

The Eagles stormed the field to celebrate the continuation of their season as the final score showed 34-28.

The game was highlighted by the rushing game for both teams as Boyer carried for 173 yards on the ground for the Eagles, and Hill busted out 192 yards from scrimmage for the Panthers. Boyer recorded 117 yards through the air while Burleigh threw 29 times for 207 yards. Joel Whitteker hauled in 8 catches for 139 yards for the game.

With the loss, the Panthers bow out of the playoffs after posting an 8-3 record in 2016. Line Mountain improves to 7-4 in 2016 as their season continues next Friday.