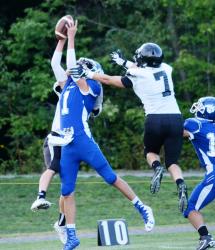 BLOSSBURG — Those football fans expecting a high-scoring affair might have been disappointed, but real football fans enjoyed a John Madden-like slobber-knocker as North Penn gutted out an 18-6 victory over Athens in what turned out to be a war of wills and attrition.

"It's a tough one," said Athens head coach Jack Young. "It got a little chaotic at times for us. We got behind the eight ball and we were dealing with people going down. We dealt with a bunch of injuries tonight, probably more so than we dealt with in years in a game situation."

Initially, the game to took on the appearance of a high-scoring game, with Athens starting off with a 13-yard scamper by quarterback Justin Reagan and a 12-yard run by Payton Lewis, but the drive ended on a Garrett Bickhart interception.

Taking over at their 19-yard line, the Panthers assembled an 11-play drive, moving into Wildcat territory. The big play came on a 26-yard pass-and-catch from Brock Burleigh to Joel Whitteker. On third-and-13, Burleigh just missed hitting a driving Bickhart at the goal line and North Penn punted.

Athens then put together a 12-play drive that featured a 12-yard run by Zack Jayne and four completions from Reagan to Kalen Keathley (7, 9, 10, 5 yards); however, the last reception resulted in a fumble that Justice Giarth scooped up and returned 32 yards.

The Wildcat defense came up big on fourth down with Jayne sacking Burleigh on their 21-yard line. The series might have been inconsequential to the outcome of the game, except Burleigh was injured on the play and, though he would return, would eventually turn the QB duties over to his brother Brent Burleigh. Keathley left the series holding his shoulder and would not return to the game as a result of the injury.

Taking over possession, Athens moved downfield on the ground with runs from Reagan, Jayne and Lewis. On the Panthers' 29, Reagan rolled left and fired into the end zone. Brent Burleigh out-positioned Cory Stivason and came up with an interception.

North Penn wasted no time in taking advantage of the turnover with a little trickery. Brock Burleigh flipped the ball to Kipp Hillson, who threw deep to Nick Kasper for an 80-yard TD strike with 7:38 remaining in the second quarter. The kick failed.

Lewis returned the following kickoff to the 31, but came up limping on the play and would not return until late in the contest.

The defenses took over and the Panthers took their 6-0 lead into the locker room at the half.

After a four-and-out by North Penn to start the second half, Athens moved the ball sparked by runs by Jayne and Reagan. Jayne opened the series with a 29-yard rumble to put him over 100 yards. He finished the game with 128 yards on 21 carries.

Facing a fourth-and-two at the six, Reagan called his own number up the middle. Calling for a measurement, the referee had to kneel down for a closer view as Reagan picked up the first down just by inches.

After two runs by Jayne, Reagan faked a handoff to Jayne and ran around the right end for the score. Aaron White blocked the Shane Colsgrove PAT for a 6-6 score with 7:26 left in the third.

Special teams played a large role in the next score. In the ensuing possession, facing a fourth-and-16 on their own 14, the Panthers got off a 54-yard punt with no return. The Wildcats had to punt on their next possession and gave North Penn a great field position after an 11-yard punt.

Three plays later, Whitteker got behind the defense as Reagan bit on the up-and-out and Brent Burleigh hit him for an easy 49-yard touchdown strike for a 12-6 lead.

Midway through the fourth, third-and-11, Reagan dropped back and White pounded Reagan just as he released the ball. Judson Wise picked off the errant pass and returned it for a score. An illegal block negated the score and the tough Wildcat defense eventually stopped the Panthers on fourth down.

With under a minute left in the game, Athens faked a punt on their own 26-yard line. Jayne, the upback, took the snap, but North Penn stopped the junior at the line of scrimmage. Five plays later, Brent Burleigh scored on a naked bootleg for the final 18-6 tally.

"I'm super proud of the kids," Young added. "The kids showed a lot of toughness and they hung in there. We had a chance, right here till the end — we had a chance. We just struggled a little bit. They made some defensive adjustments as things went on in the second half and we weren't able to respond tonight."