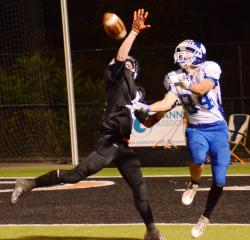 TOWANDA — It was a defensive battle on Friday as the North Penn-Mansfield Panthers rallied for a 14-6 win over the Black Knights.

"It was a great fight," Towanda coach Craig Dawsey said. "We knew coming into tonight we had a fight on our hands and we got that. We just ran out of time."

The Black Knights came out strong in front of their homecoming crowd and marched right down the field on their first drive.

Griffin Sites had a big 36-yard run to key the drive and facing a fourth down the Black Knights got a 31-yard touchdown pass from Tanner Kunkle to Dalton Potter just over the reach of a leaping Garrett Bickhart. The extra point was blocked and with 8:46 left in the opening quarter Towanda led 6-0.

"We didn't play as well as we should have, to come to Towanda and play here, they play really well, it was their homecoming," North Penn coach Tom Dickinson said. "It is tough and they punched us in the mouth, but we responded and we came away with an important win."

Towanda got a three-and-out on defense and the next drive that North Penn had the ball they moved down the field to the Towanda 23, but were stopped on a fourth and three.

Towanda had a good drive going as Kunkle hit Potter on a 26-yard pass to the 32 and on fourth and four Towanda got a six-yard pass from Kunkle to Luke Tama.

However, a sack by North Penn on fourth down stopped the drive.

The Black Knights got the ball back, but that's when Joel Whitteker took over for North Penn.

Whitteker intercepted a pass, and then just seconds later he hauled in a 32-yard touchdown from Brock Burleigh. The kick failed and with 2:20 left in the half the game was tied at six.

"Joel is a playmaker and he made big plays tonight when we needed him," Dickinson said.

After that the two teams traded turnovers as Garrett Bickhart intercepted a pass for North Penn, and Todd Koss answered with an interception.

Brendan Hill picked off a pass for North Penn with 26 ticks left in the half. Burleigh then hit Whitteker on a 46-yard pass down to the two-yard line with seven seconds left in the half. The Panthers took two shots at the end zone, but the Black Knights' defense held.

In the fourth quarter the Panthers took the lead as Burleigh hit Bickhart on a 50-yard touchdown. The two-point try was good and with 11:50 left in the game North Penn took its first lead at 14-6.

North Penn stopped Towanda's next drive with a fourth-down stand.

Towanda's defense came right back as Keegan Kisner and Ben Jenkins each sacked Burleigh. Kisner had a 22-yard punt return to start the next drive. Towanda got inside the North Penn 40, but the Panthers got the stop on fourth down at the 37 and from there North Penn ran out the clock.

Dawsey was happy again with the way his defense stepped up.

"I credit coach (Jamie) Wecker," Dawsey said. "He is a great coach and a great teacher. He does a real nice job getting the most simple form for the kids to understand."

Burleigh threw for 177 yards and a pair of touchdowns for North Penn. Bickhart and Whitteker each had a touchdown catch and an interception in the game.

"Tanner Kunkle has done just a phenomenal job for us as a freshman quarterback," Dawsey said. "He had some miscues today, but he's growing every week and he will continue to improve. I look forward to the next three weeks."

Kisner ran for 86 yards on 26 carries for Towanda and Sites ran for 74 yards on five carries.

For the Panthers this was a big win.

"The schedule has been okay to us at this point," Dickinson said. "Traveling to South and Towanda were good tests and we have to be happy coming away with a win here."

North Penn hosts CV next Friday, while Towanda is at Troy on Friday.