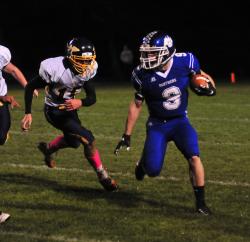 BLOSSBURG — It took nearly a quarter for North Penn-Mansfield to warm up, but under the night's full moon, the Panther lit up Cowanesque Valley in a 35-0 shutout at Jones Memorial Field in Blossburg.

Cowanesque Valley's opening drive moved across midfield with the help of a late hit penalty on a third-down run by Matt Barber, but faced with a fourth-and-7 at the Panthers' 41, the Indians went to Barber again. The Panther defense mauled Barber at the line, holding him to no gain and turning the ball over on downs.

North Penn came out passing with Brock Burleigh connecting with Joel Whitteker for a 13-yard gain. Three plays later, the Panthers faced a fourth-and-three only to have Cowanesque sack Burleigh for a loss to regain possession.

The Panthers took over at midfield after stopping Corey Wells 15 yards shy of a first down on a fourth-down run and Burleigh took CV to flight school.

First, the senior quarterback hit Whitteker for a 27-yard gain and then found Garrett Bickhart in the flat for 14 yards to the 9 yard line. Burleigh connected with Whitaker for an apparent touchdown, but the play was called back for holding. Two plays later, throwing to a wide variety of receivers, Burleigh tossed a 12-yard touchdown to Justin King.

Justice Giarth added the PAT for a 7-0 lead with 1:48 remaining in the first quarter.

After the ensuing kickoff, CV moved the ball behind runs of 7 and 11 yards by Wells. However, following a holding call, the Indians faced a third-and-19. Freshman quarterback Seth Huyler flipped a 14-yard pass to Wells to set up a fourth-and-four at midfield. Drew Brandes came up two yards short and turned the ball over, once again, on downs.

The Panthers then gave Cowanesque Valley a dose of Brendan and Brock. Brendan Hill started the series with runs of 7 and 8 yards. Burleigh then connected with Whitteker for 8 yards and Bickhart for 18 before returning to Whitteker for 9-yard reception. Hill capped the drive with 2-yard touchdown plunge and Giarth, as he did all night, added the extra point for a 14-0 lead.

After both teams failed to move the ball, the Panthers punted and pinned the Indians in at the fifteen. Barber proceeded to fumble the ball for the game's only turnover on the next play.

North Penn went to Kipp Hillson on consecutive plays with Hillson scoring on an 11-yard run for a 21-0 margin at the half.

The Panthers opened the second half with a touchdown drive paced by three runs by Hill for 18 yards, but the big play came on a 48-yard pass play from Burleigh to Bickhart. On the next play Hillson scored from 2 yards out.

The rout was on as North Penn scored on their next possession. After a 9-yard run by Hill, Whitteker took an inside handoff from Burleigh and raced 44 yards. Garrett David finished the drive with a 4-yard run and the final tally of 35-0.

The fourth quarter saw the teams mounted long fruitless drives. The Panthers had an 11-play drive ended as they turned the ball over at CV's 8 on downs. The Indians moved the ball from their eight to North Penn's 20-yard line on a 14-play drive only to see time expire and end the game.

Burleigh finished the contest completing 13 of 17 passes for 164 yards and a touchdown with Bickhart snaring six passes for 90 yards. Whitteker adding four receptions for 57 yards and a 44-yard run for 101 yards of total offense.

Cowanesque Valley hosts Bucktail next week while North Penn-Mansfield hosts Troy next week while looking forward to a matchup against Wellsboro, who remained undefeated, in the final game of the regular season.