Dawsey back at Towanda. 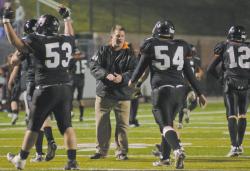 Following the 2011 season Craig Dawsey made one of his toughest decisions.

Because of health issues Dawsey stepped down as Towanda football coach.

On Monday the longtime Black Knights coach was back as the Towanda school board approved his appointment as coach by a 9-0 vote.

"I'm really excited about it," Dawsey said. "I've been through a lot in four years. It's been very tough, but I have come out on the other side and hopefully I can do something positive and keep the positive thing Jamie (Wecker) had going. Thank God he is going to stay and help me out."

Wecker, who was the longtime defensive coordinator under Dawsey, knew when he stepped down that Dawsey was planning to take back over the program.

"Craig didn't disappear the last four years," Wecker said. "He was still around and I still talked to him about a lot of things. He loves Towanda football and he loves coaching and he does a great job, as his track record shows. It's a win/win for Towanda football. He comes back and can assume the role he left four years ago.

Towanda Superintendent Steve Gobble is excited to have Dawsey back.

"Very excited to have Craig Dawsey back," he said. "Craig is a leader of this community. His last four years being off was for personal and health reasons. We are glad he is feeling better and ready to commit to Towanda once again."

When Dawsey left his health was giving him pain and making it hard for him to walk. However, a surgery helped to fix many of those problems.

"The major thing was I had an operation in October at a place called the Laser Spine Institute which really opened up my hips," Dawsey said. "I don't have that deep, throbbing in my hips. Fortunately my brother is a radiologist and said let's take some pictures and we sent them down to Laser Spine Institute (in Wayne, Pennsylvania) and they said they could take care of everything.

"They said when would you like to come down and I said how about tomorrow. They said tomorrow's Saturday. I was really excited to go down. I'm really blessed to have no real residual pain from four years ago to now."

For Dawsey that decision four years ago was a tough one.

And, Dawsey is happy his health allows him to return now.

"It went from being really, really bad to really good," Dawsey said of his health. "Just with the things I've had to do and people I have had to work with, I kind of have a team in place to keep me healthy. As of right now, it's been a great experience all the way around."

"I think that's great, that's what Craig is, he's a coach, he's a teacher and he's a coach," Young said. "I&'m really happy for him. He's had great success in the past, there's no doubt."

For Young it's always been fun to coach against Dawsey.

"We always had a great time going against each other, we had good battles," Dawsey said. "It's always a good time, we always used to call each other about game day in the morning and we always had fun with it because we are longtime friends."

As a Towanda graduate Young is happy to see some of the school's history returning.

"It's a tradition rich program, I think in some ways schools such as Towanda need to get back to their history and look at some of the people that helped establish the programs," Young said. "History is always important and I know Craig will take care of that end of it."

Dawsey takes over a young Black Knights team that returns some talented underclassmen, and will likely get help from an undefeated junior high team.

"I think it's something we have to build one brick at a time," Dawsey said. "Kind of get that castle to be back to where we think it should be. I think we have a good nucleus coming, I think we should be respectable."

For Dawsey it's a help that his longtime assistant Wecker was the head coach the past four years, so there haven’t been huge changes since he left the sidelines.

"I think that's a big benefit, a real big benefit," Dawsey said. "He's done such a great job and I can't stress that enough, just hopefully I can keep it going."

While Wecker enjoyed things about being a head coach, the time commitment was tough for him, so he's happy to go back to a defensive coordinator role.

"The thing with Craig being healthy and feeling well, it's a big win for Towanda football," Wecker said. "Now, I'll be able to just go back and coach.

"That's going to be great, my love is coaching first and foremost. I loved my four years being head coach and there is some stuff I'll miss, but like I said my passion was coaching the X's and the O's and when I was the head coach and the defensive coordinator, you lose time one way or another. With Towanda's program what has been built over the years, there is a lot of responsibilities for offseason stuff and it really makes it difficult to do both. With that in mind I am excited to just be able to do what I used do, which is my passion of coaching defense. It will be nice being able to spend more time with my family. I really want to be able to go watch my kids and go and see what they are doing. My son doesn't play football. He shoots at YHEC and I'm excited to go watch him, and my daughter plays sports and I want to be able to watch her."

That time with family is something that Craig got to enjoy the past four years away from coaching.

"Looking back the last four years I did a lot of daddy/daughter time that I made up a lot of time with my daughters," Dawsey said. "Time they didn't really get a chance to spend with me because I was busy doing something else. I got to see my daughter (Sarah) play volleyball. I went to California with my daughter Rachel, and I went to Texas to see my son (Jordan). Hopefully the second time around I can keep things in a little better perspective, because I don't think I did that the last time. I was so consumed with the 100 yards of a football field."

With four years as a head coach under his belt, Wecker thinks it will only make him better as a coordinator in the future.

"The experience as a head coach is invaluable," he said. "You learn things through experience, so hopefully I can add more to the program as far as helping him (Dawsey) and adding the experience of being a head coach."

Gobble said the players were all told about Dawsey returning as football coach before Monday's school board meeting.

"The kids were told initially at the banquet and also there was a meeting for all the eighth grade football players where they introduced Craig Dawsey," Gobble said.

Dawsey is excited to be coaching again and hopes the players are just as excited to have him as their coach.

"I hope it's a good feeling, I certainly would like to start over, for me it's what it's really about, I get a second chance here," Dawsey said. "Four years ago I didn't think I'd ever get that chance, this is something really, really special for me and I hope it's special for them. They are going to make my life better being around them, and I hope I can teach them and maybe they will learn a little football too."

When Dawsey left he never thought he'd get the chance to be back coaching Towanda football. Over those four years the coach believes he learned a lot.

"I think when I sit back and kind of reflect it's kind of funny that the four years I had out put things in perspective for me," Dawsey said. "It's almost like the wins and losses are great, but I just got to compete again so I won. It's pretty amazing I have this opportunity and I am very grateful for it. So, I'm going to step out in faith and see what I can do and try and be an example for young people."