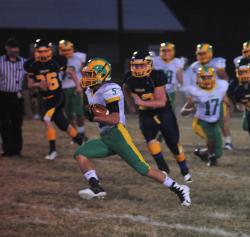 WESTFIELD — The Wyalusing Valley Rams held on late, on the road, to defeat the Indians of Cowanesque Valley in a hard-fought 28-14 showdown on Friday night.

Falling short in their comeback effort, the Indians have dropped four of their first five games, while the Rams now sit 180 degrees in the other direction at (4-1).

Cowanesque Valley's offense took the field looking to pull off the upset as they started slowly but steadily on their way to a nine minute opening drive, starting from their own 31. The 69-yard drive was polished off by a 15-yard touchdown run by the Indians' quarterback, Colton VinLuan, and finished with VinLuan running into the end zone for the two-point conversion to give the Indians the 8-0 lead.

Wyalusing looked to respond quickly, but three penalties and a sack by the Indians' Alex Cox, stalled the Rams' first possession. The Rams showed early signs of life however, as Derek Frederick sparked a huge run on a 3rd down earlier in the drive before his offense would punt the ball away.

The Indians could not recreate their earlier fortunes on their second possession, going three and out before an unfortunate Rams bounce on the Indians' punt netted 2 yards and set the Rams up on the Cowanesque Valley 23 yard line.

The Rams took advantage of the terrific starting position as Frederick picked up a 10-yard rush on 4th down to set up 1st and goal from the 4-yard line. On the ensuing play, Ryan Kipp took the handoff and rushed for a 4-yard touchdown before Frederick ran in for the two-point conversion, tying the game at 8-8.

After the Indians' offense failed to gain a first down, Rams offense went to work as they picked up four first downs on four plays followed by an 11-yard rush by Frederick. After another successful two point conversion, the Rams were out in front 16-8.

Cowanesque Valley could find no offensive rhythm for the remainder of the first half as they turned the ball over after failing to move the chains on 4th down. Wyalusing once again took advantage of starting with the ball inside of the Indians' territory. Derrick Clark picked up a huge 4th down conversion before Calvin Burke completed a 25-yard touchdown pass to Frederick to give the Rams the 22-8 lead with 1:01 remaining.

With just under a minute to go in the half, Derek Frederick intercepted Colton VinLuan at the 50-yard line to give the Rams a shot to extend their lead with 40 seconds remaining in the half. Wyalusing would do just that as Burke found Frederick in the corner of the end zone for a 14-yard touchdown to extend the lead to 28-8 with just three seconds on the clock.

Riding their 20-point halftime lead, the Rams looked poised to extend their lead on the opening drive of the 2nd half until their 44-yard drive came to a screeching halt as Burke was picked off in the end zone by Kurtis Easton (Soph.)

After picking up their first 1st down since the opening drive of the game, the Indians drove the length of the field, on a drive that carried over into the 4th quarter, before VinLuan kept it himself for a 14-yard touchdown run to pull the Indians within 14 points.

The ensuing onside kick was recovered by the Indians, giving them a chance to get back into the game with 10:48 remaining. After a holding penalty set them back on 3rd down, the Indians turned the ball over after failing to convert a 4th and 7.

The Rams would run out the clock and secure their fourth win of the 2016 campaign by a score of 28–14. A hard fought loss for the Indians resulted from a failure to convert on 3rd and 4th downs.

Offensively, Calvin Burke went 5-for-11, throwing for 57 yards, and recording two touchdowns, while his counterpart Colton VinLuan went 5-for-9, throwing for 109 yards. Derrick Clark led the Rams in rushing, picking up 112 yards on 17 carries, while the Indians' leading rusher, Drew Brandes recorded 81 yards on 19 carries.

Defensively, the Rams were powered by Frederick who recorded six tackles and an interception. The Indians' defense was led by Thomas Shadle who picked up four tackles in the loss.

Both teams will be on the road next week as Wyalusing (4-1) takes on Montgomery on Friday, and Cowanesque Valley (1-4) travels to take on Columbia Montour on Saturday.