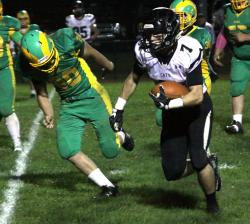 Jayne rumbled for 251 yards and a score on 25 carries and Keathley caught nine passes for 183 yards and four more scores. Reagan finished 12-of-18 for 219 yards and four touchdowns — Cory Stivason caught his fourth — and ran for another score.

Athens coach Jack Young said it was a team win.

"Some of our playmakers made plays. It was a total team effort," said Young. "What was nice about (Friday night) was that I saw a lot of guys doing extra things and making plays. We defended screens and we were definitely a better tackling team than we have been, maybe all season."

Athens had numerous big plays, with the first two coming on the Wildcats' second possession. Jayne opened the drive with a 20-yard run and Keathley had a 45-yard reception along the way. In the end, it was Reagan who did the honor, going in from two yards out.

Wyalusing answered back on its second play after the kickoff when Carl Gowan went right up the gut for a 54-yard TD run.

The third play of Athens' next series was a 14-yard Jayne run and the next a 65-yard Reagan-to-Keathley hookup for a score.

Wyalusing's next series ended the way two others would in the game when Kaden Rude picked off the first of three he would get in the game.

Athens took advantage early in the second when Reagan hit Keathley from 17 yards out. The third of Shane Colegrove's six successful PAT boots made it 21-6 Athens.

Late in the half, Rude got his second pick of the night, setting Athens up at the Rams' 23-yard line. Two plays later Reagan hit Keathley from 14 yards out to put Athens up 28-6 at the half.

Wyalusing threatened to make a game of it late in the third with a 6-yard Derek Frederick run, but Athens got that back early in the fourth.

After two Jayne runs covered 39 yards, Reagan hit Stivason in the front corner of the end zone from 12 yards out.

Wyalusing closed the gap with 4:40 to go on a 15-yard Gowan run, but Jayne closed out the scoring with a 68-yard burst up the middle in the game's final minute.

"We have to learn from our mistakes," said Wyalusing coach Frank Kinney. "We fought back in the second half pretty good, but fall short, giving up a couple of big plays."

Gowan finished with 101 yards and two TDs on 13 carries for Wyalusing.