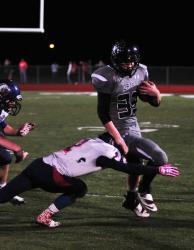 ATHENS — Smashmouth football. That's been Sayre's strong suit all season long. Friday night, Athens was able to trump that with its own version of smashmouth football on the way to a 28-0 win.

"They just beat us," said Sayre coach Steve Satterly. "They played our style of football. It was a physical game from start to finish. There wasn't a lot of pizzazz."

Sayre won the first half yardage battle, picking up 95 yards of offense and allowing Athens just 57.

Still, Athens led 7-0 at the break. That's because Sayre broke the cardinal rule of playing against Athens: Don't kick the ball to Kalen Keathley. Sayre's opening kickoff bounced once and then right into Keathley's hands. The senior speedster broke hard left, picked up his wall and raced down the left sideline 83 yards to give his team all the points it would need with just 15 ticks off the first-quarter clock.

Undaunted, Sayre came back with its best drive of the night. The Redskins went 57 yards on 14 plays with standout Tylor Belles carrying the bulk of the mail. Belles went for 21 yards on his second carry and later added a 10-yarder. That run put the ball at Athens' 14-yard line and Ingrassia gave Sayre a first down at the 11.

That's when the Wildcats clamped down. Athens dropped Belles for a three-yard loss and stopped quarterback John Esposito after a six-yard gain. After an incomplete pass on third down, Esposito found Jake Goodrich for the completion, but was well short of the first down.

Sayre's defense had Athens' number throughout the first half. The Wildcats had just three first downs and never advanced past their 45-yard line.

Athens' defense was just as stiff, allowing Sayre just 36 yards the rest of the half.

Sayre's last best chance to score started at Athens' 43-yard line with 16 seconds left in the half. Esposito hit Goodrich for 19 yards on the first play, but the last two plays of the half were incomplete passes.

The second half was more of the same for the Redskins, but Athens' offense finally put a drive together after taking a Sayre punt at its 42-yard line. Zack Jayne was the Wildcats' locomotive in this game, hammering his way for a total of 190 yards on 27 carries. Of that number, 128 came in the second half on 15 carries.

"They moved the ball well running the football. We were able to at times, but just not consistently like we have been," said Satterly. "That's on me. I have to get better as a play caller and as a coach overall. I'll accept that and I can move on."

The change came from the halftime talk in the Wildcats' locker room.

"We talked about a few blocking adjustments, but at the same time, we talked about the fact that we needed to flip the field and I challenged our senior linemen," said Athens coach Jack Young. "I challenged them and I think we controlled the line of scrimmage in the second half."

Jayne carried the ball on Athens' first five snaps for 39 yards and, after an Athens penalty, caught an 11-yard Justin Reagan pass and added a 10-yard run. Athens hurt itself with penalties on the drive, turning a 58-yard drive into an 88-yard march, but the Wildcats managed a touchdown on a fourth-and-11 play with a 22-yard pass down the seam from Reagan to tight end Jarod Stanfield on the last play of the third quarter.

Then the floodgates opened for Athens, which had just 71 yards before the drive that ended the third quarter. Athens finished with 294 yards from scrimmage, meaning that the Wildcats put 223 yards on the stat sheet in the last 17:17 of the game.

The next two Athens drives ended in 34-yard touchdown plays. Athens took over at its 43 after a punt. After running Jayne, Nate Bradley and Reagan, the Wildcats went up top with Reagan hitting Keathley with a 34-yard touchdown pass.

The next time the Wildcats got the ball, again after a punt in a game with no turnovers, they followed runs by Jayne, Payton Lewis and >Matt Depew with a 34-yard Jayne run right up the middle.

"I think our defense did a heck of a job," said Young. "Statistics mean nothing to me, but we shut down an offense that runs the heck out of the ball. They've run the ball on everybody that played this year. I'm super proud of our defense. We had a good game plan and our defense executed."

Sayre ended the game with 91 total yards, 76 on the ground. Belles had 63 yards on 23 carries and that was mostly because he was getting hit before he could get to the line of scrimmage.

"We talked about tackling," said Young. "We couldn't hit Tylor in the hole and give him second chances. He's hurt a lot of people all year long with that."

For years, the Sayre-Athens game has been the last game of the season for one or both teams. This season, each has earned a District IV playoff berth.

Athens, seeded fourth in Class AAAA, is expected to travel to Selinsgrove on Friday night for a game against the top-seeded Seals. We'll have confirmation by Monday.

Sayre's situation is much easier. The top-seeded Redskins will host Canton Friday night and have home field advantage throughout the District IV Class A playoffs.