Athens pulls away from Troy. 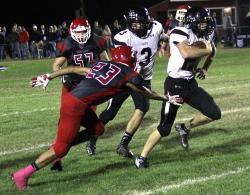 TROY — The Athens Wildcats came into Troy last night looking to turn around a losing season, and rode the wave of five second-half touchdowns on their way to a 49-27 victory.

"We have heard so much negativity this past week, I told the team we were just going to have to scrap out a win, and that's just what we did," said a relieved Athens head coach Jack Young afterward. "Our seniors stepped up and made plays, none bigger than Matt (Collins) interception to start the second half."

The teams appeared to be evenly matched, as they traded scores in the first half. The Trojans would strike first, as on their first play from scrimmage Zack Zimmerman took an option give off the left side and rumbled 59 yards to paydirt. Seldon Rogers added the PAT, and Troy led 7-0 at 5:43 of the first.

The Wildcats answered back covering 51 yards in 10 plays, with workhorse Zach Jayne punching it in from four yards out. Shane Colegrove tied the score at seven with his PAT at 3:37.

The Trojans countered with a 12 play 80 yard drive, capped by a 23-yard fade from Clark Jackson to Ja Wallace in the left corner of the end zone. Rogers' kick was short, and Troy led 13-7 at 10:47.

Again the Wildcats returned the favor, covering 80 yards in seven plays, as Payton Lewis took an option pitch around the right end 47 yards for the score. Colegrove's kick put Athens up 14-13 with 8:14 left till half.

The teams traded punts before the Wildcats put on one final drive before halftime, but the Trojan defense tackled Jarod Stanfield on the 1-yard line as the clock expired.

Troy came out with the mindset to attack the middle of the Wildcat defense, lining up in the power I formation and feeding tailback Bailey Cohick with several opportunities. The power game took them right down the field, covering 59 yards in 11 plays. But on 2nd and 10 from the 21, Matt Collins would make the play that turned the momentum for Athens. Stepping in front of Clark Jackson's pass, he returned the interception 79 yards for the score, opening the floodgates for the Wildcats and putting them up 21-13 following Colegroves PAT.

Following a Troy three-and-out, they would only need four plays to cover 44 yards, with Zach Jayne running in from 14 yards out to extend the lead to 28-13 at 5:01.

After forcing another Trojan punt, their offense continued to click, moving 56 yards in nine plays capped by a Kalen Keathley 7-yard end around. Colegrove was again true, and the lead was now 35-13.

To their credit, the Trojans didn't quit, quickly scoring on a four-play 82-yard drive capped by a 33-yard Zimmerman run. The two-point conversion pass made it 42-21. Following an Athens fumble, Troy would close the gap to 42-27 as Jackson scored on a 2 yard keeper. But the Wildcats would close out the game on Reagan's 30 yard QB draw play with 2:49 left.

Zack Jayne led all rushers with 127 yards on 19 carries with two scores, while Justin Reagan passed for 232 yards and one score.

Zack Zimmerman had 116 yards rushing for Troy, while Ja Wallace caught 12 passes for 128 yards and one score.

Athens will play Towanda next week, while Troy travels to Wellsboro.