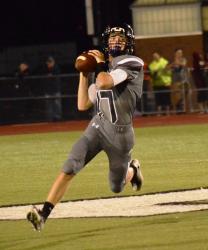 ATHENS — Athens' matchup against Towanda was rough around the edges and penalties racked up, but the Wildcats kept their composure for a 21-6 victory over the Black Knights on Friday.

"It wasn't pretty, but our kids fought until the end," said Athens coach Jack Young. "The bottom line is, we've been talking a lot over the weeks about how we need to make plays when it counts."

Young continued, "Luckily, we did that. Defensively, I think we made some plays but down the stretch it looked like we were getting tired. (Towanda) caught some momentum in the second half. We struggled in all facets of the game, but made the necessary plays to hold them off."

Penalties almost did some damage for the 'Cats, getting 11 yellows for a loss of 83 yards. However, they found a way to get around their miscues and mold a stop down the stretch.

"It's just part of the game," said Young. "For whatever reason this year, we're killing ourselves offensively with the yellow flags. Maybe some of that is on me, but then again it's just part of the process of getting better. I'm glad it didn't affect the outcome of this game."

Athens kicked it into high gear on their second possession of the game. With over four minutes left in the first quarter, Justin Reagan found Kalen Keathley in the end zone for a 29-yard touchdown and a 7-0 lead.

After Towanda fell to three and out on their possession, Athens set up shop at their own 25-yard line with a handful of minutes left in the first.

A couple plays later, Zack Jayne came up big with a 35-yard run to put the Wildcats in Black Knights territory at the 18-yard line. After 4-yard run from Jayne, Reagan connected with Mitch Kerrick for a 14-yard touchdown catch in the end zone with 23 seconds left in the quarter.

After a 14-0 halftime lead for Athens, Towanda finally broke through on their second possession of the third quarter.

Athens committed a big personal foul on Towanda, giving the Black Knights a chance to move forward in Athens territory. The Wildcats forced a fumble after Tanner Kunkle completed an 8-yard pass to Luke Tama, but the Black Knights recovered to continue their drive.

A few plays later with Towanda first and goal at the 9-yard line, Kunkle completed a pass to Griffin Sites. At first, Sites juggled the pass but dove into the end zone with 2:04 left in the third.

A third of the way through the fourth quarter, Towanda grabbed good field position, but their comeback attempt was thwarted. Keegan Kisner ran the ball on first and 10, but fumbled the ball going down.

Athens' Kaden Rude immediately followed with picking up the live ball, taking it to the house for a 59-yard touchdown return 7:52 in the fourth. Suddenly, the Wildcats had a 15-point advantage.

Towanda's next possession didn't last long, as Jayne picked off Kunkle for a 10-yard return midway through the quarter.

A couple minutes later, the Black Knights got into Athens territory. Kunkle threw a pass to Sites, but with Rude covering Sites, Rude got in front and grabbed the Wildcats' second interception of the night.

"Kaden is a headsy athlete and football player," said Young. "He's only a sophomore, but he's starting to feel more comfortable back at his position. He made two great plays, and that's what team football is all about."

Jayne rushed for 115 yards on 22 carries to lead the attack on offense, but Young believed he could've seen more.

"Offensively, we have to work on a lot of things," said Young. "Discipline is definitely one of the top things we have to work on in practice. We've got to be able to put four quarters of football together. Next week is homecoming so we need to make it big for ourselves."

Even with the victory, Young knows his team still has their work cut out for them.

"We got a good, nice win, but I told the kids we have a long way to go," said Young. "We're going to put it together one of these nights and show people what kind of team we really are."

The Wildcats coach gave credit for the Black Knights giving them a fight.

"Hats off to Towanda," said Young. "I told the team they're going to come in and be scrappy. One thing Towanda wouldn't do is quit."