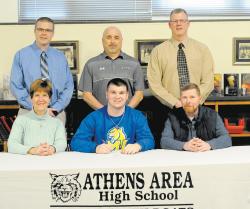 A journey that started many years ago will run for four more years as Athens standout QB Aaron Barry signed on to play football while pursuing studies at Middle Atlantic Conference member Misericordia University in Dallas, Pa.

Barry's high school path wasn't a straight line to the top of the depth chart, but his senior season in which he hit 95 of 198 passes for 1,582 yards with 17 touchdowns and eight interceptions, was stellar.

"He's the kind of kid who worked real hard," said Athens head coach Jack Young. "He developed a close relationship with Jason Eby before Jason left to go on to other places. He just kept working hard and waiting his turn. He did something special this year."

For Barry, the choice of university was simple.

"As soon as I stepped on campus, I knew that was the place for me to be," said Barry, who added that the school felt right and was just what he was looking for. "It's a smaller school, which was what I wanted. I didn't want to go anywhere too big."

Barry said that the school's similarities to his Athens roots played a big part in his decision.

"I thought that their staff was a lot like ours and that they had a lot of similar things they wanted to accomplish."

Young is excited for his QB.

"Any time you have a young an who can step to the next level — I don't care what division — that's a big step," said Young. "He's an outstanding student and he's proved that he's an outstanding football player."

The Cougars' first season was 2012, with Athens grad and still head coach Mark Ross at the helm. The going has been a bit on the bumpy side, as one would expect for any startup. The Cougars are just 3-35 in four years, but have shown marked improvement over the years.

In the team's first year, there were three shutout losses of 67 points or more. Even though the ensuing years didn't show it in the win-loss column, the Cougars have begun to be competitive nearly every time they step on the field.

"They've laid the foundation and you have to do that before winning games and championships," said Barry.

"Misericordia's a pretty new program and it's special to us here at Athens to have Athens alum Mark Ross as coach," said Young. "It's nice to have those ties and I know Mark's real excited to have (Aaron) coming."

Barry said that the coach's local connection played a big role in his decision.

"That was a big (factor)," said Barry, who said that he will start undecided, but wants to go into health care management and that Misericordia has good programs for that.

Athletically, Barry has three other quarterbacks to compete against for playing time.

"I'm hoping to compete for a spot and do well," said Barry, who passed for 2,289 yards in a Wildcats uniform.