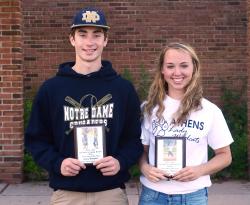 Both were three-sport athletes. Both made All-Region teams in multiple events. One plays in New York, one in Pennsylvania. Both are this year's The Daily & Sunday Review Newcomers of the Year.

Athens' Emma Adams and Notre Dame's Gary Raupers earn the honors this year as the top newcomers in the region.

"It's awesome," Adams said. "I knew I thought I would do good this year. I did more than I expected I would. I couldn't have done this without my team."

"I'm surprised," Raupers said. "I had no clue coming into this year how it was going to go. I went to football practice first day and they asked me if I ever played quarterback before. I just tried it out, and that took off. Then basketball I came in off a junior varsity year and that took off to. And, baseball just a lot of fun in the outfield I guess."

Raupers, who lives in Pennsylvania, in the area of the NTL, knows how good all the athletes on both sides of the state are, so it's special for him to be honored as the best newcomer.

"Out of all the kids, all the athletes around here, it's pretty cool," he said. "I have seen them all play. All these kids are amazing athletes. To be the newcomer of the year out of all them is impressive."

For Adams, the success started in the fall with soccer season.

"It was a good start," she said. "My team was amazing. It's going to be hard to replace the seniors."

Raupers also had a good start to the year as the Crusaders had a strong football season.

"It was fun, we had a winning record, were division champs," Raupers said. "I wish we could have gone farther, but next year."

Raupers got hurt during the football season, but that didn't stop him from playing out the end of the season with a cast on his hand.

"They let me play, I was surprised," Raupers said. "I knew I couldn't play quarterback, obviously, because it was my right finger. But, they let me go in there and play a little bit and I almost had a catch. It didn't work out. I played some defense, but I was happy I was able to end my season."

In the winter Raupers stepped right into a starting role with Notre Dame.

"Darius Garvin, obviously he was a huge impact on the team, and people had to step up and thankfully I did," Raupers said.

For Adams basketball season meant time on JV, while getting some experience at the varsity level. While she wasn't a starter in basketball, Adams believes the varsity experience is helping her.

"It did, it definitely did," Adams said. "Basketball is a fun sport, not my number one sport, but a fun sport.

In the spring, Adams came out and was a first-team All-Region player in softball, helping to lead Athens to the district playoffs as their number one pitcher, and one of their top hitters.

Adams knew she could have success in softball, but she didn't expect to have the year she did

"Not necessarily," Adams said of expecting that big of a season. "But, I believed in myself and thought I could do good."

After being a starter in soccer, Adams had added confidence going into softball.

For Raupers, it was a lot of the same in the spring.

He expected to be able to contribute, but he was surprised how much he was able to help out.

"I got to hit in the middle of the lineup, which was surprising," Raupers said. "I didn't know I was going to have that kind of impact on the team, but I'm lucky I did. I had fun with it."

After big starts to their varsity careers, both athletes are excited to see what next year brings.

"I am very excited, I think I can do more than expected of anyone around here," Adams said.

Raupers is ready to see what the future holds, but he knows he needs to start working right now.

"I'm super excited," Raupers said. "I have to go start working out and get bigger, so I can get better and more athletic so it doesn't hurt as much."