Wildcats pull away from Hughesville. 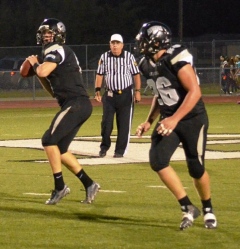 ATHENS - An efficient performance from senior quarterback Aaron Barry, a slew of playmakers contributing on offense and timely defensive plays made for a comfortable-looking 41-20 Athens win over Hughesville Friday night at Alumni Stadium.

While the win looked lopsided by the scoreboard, it was a series of key plays down the stretch of the first half that would make the difference.

The Wildcats held a 21-14 lead with less than five minutes left in the second quarter as Hughesville's offense seemed to be finding its stride.

The Spartans faced a fourth-and-long from the Wildcats' 47-yard line when junior end Luke Newman broke through the line for the sack, forcing a turnover on downs - leaving just 67 seconds for Barry and company to take control heading into the half.

"I was just playing the play," Newman said. "(At halftime) they told me how big that play was."

Barry would deliver, going 3-for-3 on the drive with a rollout toss to Newman who ran an out from the backfield for the 4-yard score. Austin Lister's point after (5-for-6 PATs) gave Athens the two-touchdown lead, and ultimately as much breathing room as they would need.

"When we scored that touchdown (Hughesville's) body language changed," Athens coach Jack Young said. "Then it was putting the pedal to the floor. When it's time to go, you go."

Barry's touchdown throw to Newman accounted for one of his four touchdown passes in the game. Barry finished 11-for-13 for 188 yards.

Hughesville didn't go right away, as quarterback Landon Henry led an 11-play drive that saw the Spartans reach the Athens' 6-yard line to start the second half.

Again, it was factotum Newman who made the key play, forcing the fumble to put Athens back in the driver's seat.

"He's really starting to turn it on," Young said of Newman. "He's starting to understand the game."

Athens would put the proverbial pedal to the floor with Barry hitting Kalen Keathley for a 48-yard score, and after Hughesville forced Athens to turn the ball over on downs on its next possession the Spartans were able to get one back with Henry finding Adam Warburton for the 28-yard touchdown.

Henry finished 15-for-27 with 192 yards and two touchdown passes.

That would be the last time the Spartans found the end zone, and on Athens' first possession of the second half Zack Jayne galloped 49 yards on a fake double reverse for the final points of the game.

"We're resilient, that's all there is to it," Barry said. "They punched us in the mouth, we came back and punched them in the mouth; it feels good to get the win."

Junior running back Kalen Keathley started the scoring in the first half by taking a sweep on the first play from scrimmage for an 80-yard touchdown, and after trading possessions with the Spartans, Barry found tight end Bill Bennett for the 14-yard score toward a quick 14-0 lead after one quarter played.

While all facets of the Wildcats offense seemed to be clicking to start the game, Hughesville took control early in the second quarter, scoring twice in two possessions with quality of nine and five-plays respectively to even the score with just over five minutes left in the half.

Barry found Lister for a 30-yard score on the ensuing drive, and after Lister's kick Athens pulled back ahead 21-14, setting up the defining waning moments of the first half.

For the Wildcats, Jayne finished with 13 carries for 138 yards, Nick Watkins reeled in four passes for 53 yards and Keathley caught four balls for 87 yards.

For the Spartans, receiver Zach Fry caught 10 passes for 123 yards and a touchdown.

The win moves Athens to 2-0 on the season while Hughesville drops to 1-1.