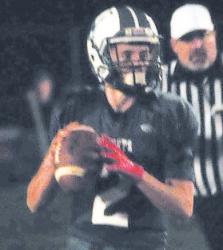 WELLSBORO — Wellsboro scored a pair of second-half touchdowns and held off Wyalusing for a 21-13 victory in NTL action on Friday night.

The game was tied at seven at the half, before Wellsboro scored back-to-back touchdowns in the second half.

The Rams cut the deficit to eight with 6:50 left, but that’s as close as the game got.

Wellsboro struck first at 4:26 of the second quarter when Quinn Henry scored on a 1-yard touchdown run. Nic Ingerick hit the extra point and it was 7-0.

Wyalusing tied the game with just 52 seconds left in the half when Luke Jennings scored from 7 yards out. Ryan Kipp hit the extra point to tie the game at the half.

Robert Brown scored on a 1-yard run with 9:29 left in the game and Ingerick hit the extra point to make it 21-7.

The Rams got back on the board at 6:50 when Kipp scored on a 20-yard run and he hit the extra point.

Lamphier was 7-for-11 passing for 73 yards and a touchdown for Wellsboro and Henry was 3-for-4 for 68 yards.

Henry led the Green Hornets with six grabs for 57 yards and a touchdown and Lamphier had one catch for 39 yards. Parker Jones had two catches for 26 yards and Johnny Rowland had a catch for 19 yards.

Calvin Burke was 5-for-13 passing for 61 yards passing and Jon Morrison had two catches for 22 yards, while Kipp had a 23-yard catch.