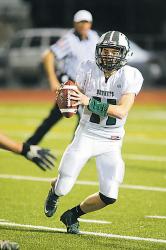 Wellsboro gave Old Forge everything they could handle but ultimately came up short in their 28-21 loss in PIAA Class A football quarterfinals Friday.

Cooper Califano had 120 yards rushing on 24 carries with two touchdowns to lead the Devils while adding four catches for 61 yards and a touchdown.

Quinn Henry led Wellsboro with 171 yards passing on 13-for-28 with a touchdown and two interceptions. He also had 15 carries for 46 yards with two touchdowns.

Defensively Tremper had 15 tackles and set a new school record of 161 tackles in the season. Robert Brown added 14 tackles while Collin Pietropola had eight.

Moser picked off a pass.

"We came with a gameplan, we made some adjustments and we quickly switched out of that," explained Wellsboro coach Matt Hildebrand. "They had some success running the ball early on us and we switched it up front and they were able to stop it. This is a good football team we went up against."

Old Forge got on the scoreboard early as Califano found paydirt on a 7-yard run with 6:57 left in the opening quarter. The Jaret Horn point after was good as the Devils took a 7-0 lead.

Wellsboro responded as Henry punched one in from a yard out to knot the game up at 7-7 after the Nic Ingerick extra point with 11:29 left in the half.

Just before the half Joseph Gutowski hit Califano for a 42 yard scoring strike. The Horn kick made it 14-7 at the break.

Gutowski was solid for the Devils, going 9-for-10 for 117 yards with the touchdown and an interception.

Wellsboro got back into it in the second half as Henry scampered 39 yards for a touchdown with 7:02 left in the quarter. Ingerick's kick made it 14-14.

The play of the series though was a Pietropola fake punt pass to Moser for a first down that set up the scoring play and gave Wellsboro a much needed boost of momentum.

"The fake punt opened our eyes a little bit," said Hildebrand. He noted how that gave his team confidence to play with the perennial state powers.

Late in the fourth it looked like Old Forge sealed it as Brendan Mozeleski returned an interception 32 yards to the house. Horn's kick was good and the Devils led 28-14 with 2:07 left to play.

But Wellsboro had some fight left in them as Henry hit Jones for a 10 yard scoring strike with 49 seconds left. Ingerick's kick cut it to 28-21.

However, Old Forge recovered the onside kick and ran out the clock for the win.

Hildebrand was pleased with the clean game that they played and that his defense kept them in the game.

He was also happy with the development of Henry as a passer. Old Forge did a good job of keeping Henry in the pocket but he was still able to hurt them through the air.

"If he can grow as a passer and add that as a runner he's going to be very good," said Hildebrand. "He's a weapon that can hurt you in multiple ways. I'm happy about his future."

Overall, it was a loss but a loss that bodes well for the future of the Wellsboro football program.

"This is a huge springboard going into next year," Hildebrand remarked. "It's very encouraging, it was definitely a learning experience for them."