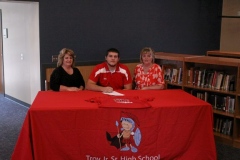 TROY - For the past few seasons Troy's Dylan Brennan has anchored the Trojan offensive line. A line that has rushed for over 4,000 the past two years.

Now Brennan hopes he can one day do that for Shippensburg University, who went 6-5 last season.

"It's my favorite sport," he said. "I've known I've wanted to do it for a while and finally I had a couple teams look at me. I just kept rolling with it and I found a school I liked."

Brennan was awed by Ship once he stepped on campus.

"Just the campus is really beautiful," he remarked. "They have a great football program, great coaches, great field. A lot of things I like there."

And he's been working this summer to get ready for tougher competition.

The Trojan graduate knows that it's going to be a big change from high school.

"It's going to be a lot faster and a lot bigger in college," Brennan explained. "The kids are all there for a reason, not just because they want to play football."

He is also going to have to do well to balance his workload as he plans on being pre-med.

"We're going to see when I get down there if I'm going to switch or not," remarked Brennan. "But right now that's what I'm going with. We'll see how it is."

As for on the field, Brennan hopes to make an impact right away.

"I'm going to try to," he said. "Who wouldn't want to try that but whatever happens I'll just keep working until I'm in the starting line-up."