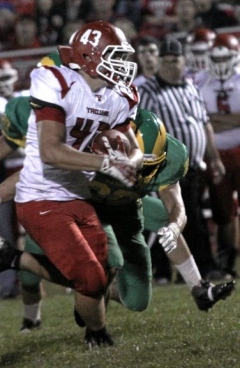 WYALUSING - Peterson Stadium was the sight of a tough loss for the Wyalusing Rams last night; but it was also the sight of yet another win for the undefeated Troy Trojans, who are now 4-0 on the season.

"It was a big win," Troy head coach Jim Smith commented after the game. "It's nice to have some of our guys back; that was a big help. We've been missing a lot of guys, but we got some of them back and a few more still healing. Wyalusing is a good football team, they will win most of their games. But we have to just keep working hard every week and getting better."

The visiting team came out with a bang, scoring on their first drive after forcing the Rams to punt on fourth-and-8. A couple carries from Ben Sherman would set the Trojans up at the Ram 11, where Cody Ercolino would easily scamper up the left side the 11 yards needed for the touchdown. Collin Binford's PAT was true, and with 6:38 left in the first quarter, Troy led, 7-0.

The home team would answer quickly, with a 40-yard run from Luke Jennings being a key component of the Rams' ensuing drive. On fourth-and-5, on the Trojan 15-yard line, a completed Derek Frederick touchdown pass over the middle to Jennings would put points up on the board for Wyalusing with 4:07 remaining in the first. But, Ryan Kipp's PAT would fall short, and Troy would hold onto their lead at 7-6.

Troy's Ben Sherman and Cody Ercolino would prove to be key runners throughout the night, taking turns picking up yards to begin the second quarter. This time, though, the touchdown to end their drive would belong to sophomore quarterback Clark Jackson, who would easily cover the three yards needed for the score with 6:18 to play in the first half. Binford's PAT was again true, and the Trojans extended their lead, 14-6.

The Rams would only gain a total of three rushing yards on their next drive, forcing them to punt on fourth-and-15, setting the Trojans up at their own 48-yard line. Kurtis Roupp would join in on the action, racing 34 yards up the right side to give Troy a little incentive. Finally, with a minute and 40 seconds left in the half, Ben Sherman would find his way to the end zone for a 4-yard score. Binford would add the PAT, and both teams would head to the locker room with the scoreboard still reading in favor of the visiting Trojans.

The Wyalusing defense emerged from the halftime break, a little shaken up and still a little off their game. They would allow the Trojans to procure four first downs on the opening drive of the second half. On fourth-and-goal, it would appear that Collin Binford would attempt a short, 19-yard field goal, but after a timeout, the visiting team decided to go for it. And what a decision. Ben Sherman would have his second touchdown on the night, easily crossing into the end zone for the 1-yard score with 4:55 left in the third quarter. Again, Binford put the ball through the goalposts, and Troy extended their lead, 28-6.

In the fourth and final quarter of the game, the Wyalusing Rams were beginning to show some promise with just over seven minutes left. After a couple of carries from Luke Jennings and quarterback Derek Frederick, the Rams would have the ball on the Trojan 37 on first-and-10. From here, Frederick would complete a touchdown pass to Jennings, giving the Rams their first points since before the half. Jennings easily completed the quick 3-yard run needed for the two-point conversion, and the Trojans' lead was cut, 28-14, this being the final score of the night.

Ben Sherman led the Trojans with 105 yards on 23 carries and two touchdowns, and Luke Jennings led the Rams with 133 yards on 15 carries, a touchdown and a two-point conversion.