Troy jumps out early in win over Towanda. 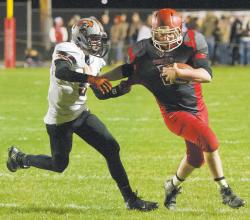 TROY — The Troy Trojans came away with a strong 35-17 victory over the visiting Towanda Black Knights at Alparon Park Friday.

The Trojans would receive the kickoff to begin the game, setting up at their own 26-yard line. From here, Ben Sherman and Clark Jackson would take turns carrying the ball, giving Troy a first-and-goal on the Towanda 8, where Cody Ercolino would easily run up the left side and into the end zone for the short touchdown with 6:51 left to play in the first quarter. Collin Binford would add the extra point, and the Trojans would go up, 7-0.

The Trojan defense would prove to be too much for the visiting team’s offense, forcing them to punt on fourth-and-11 on Towanda's first possession of the night. The Trojans would also punt, giving the Knights another chance at scoring, but unfortunately for them, this would not happen. Instead, on third-and-10, Steven Yates would throw an interception into the hands of Troy's Kyle Schucker, who would return the ball to the Towanda 29 yard line, where the Trojans would have a first-and-10.

After two carries, on third-and-3 on the 22, Ben Sherman would have his first touchdown on the night, running up the left sideline and crossing into the end zone for the six points. Binford would again add the extra point, and the Trojans would extend their lead, 14-0.

On Towanda's next possession, another interception would be thrown, but this time on part of Brandon McLinko. This would give Troy the ball on the Towanda 28-yard line, where a 14-yard Nathan Swain carry would be what it would take to get the Trojans in scoring position. On first-and-10, Ben Sherman would brush off Black Knight defenders as he trampled up the middle of the field and into the end zone for the touchdown with 9:26 left to play in the first half. Again, Binford's extra point was true, and the Trojans led, 21-0.

Towanda's efforts on their ensuing drive, although impressive, would fall short, and they would be forced to punt yet again, giving the home team the ball.

Two holding penalties on Troy would delay their next touchdown, but wouldn't stop it completely. A 12-play drive would bring the Trojans to the Towanda 1-yard line, and Sherman would easily cross into the end zone to add six more points to the scoreboard with only 3:11 left in the second quarter. Binford added the extra point, and the Trojans still held onto their lead, 28-0.

Both teams would take turns turning the ball over on downs to end the first half before heading in the locker rooms.

For Towanda, the second half would give them their chance to put some points up on the board, and for the Trojans, it would allow them to continue to extend their lead on the visiting team.

Troy would be the first team to score, five minutes into the third quarter, when on first-and-goal, quarterback Clark Jackson would run to the left corner of the end zone for the touchdown. Collin Binford would add the extra point, and the Trojans would lead, 35-0.

On Towanda's next possession, they would add to the scoreboard their first points of the game. After a few incomplete McLinko passes, Tyler Basse would line up to try for a 27-yard field goal, sending the ball sailing through the goalpost, cutting the Trojans' lead, 35-3.

The Black Knights would score twice more in the second half, while the Trojans would remain at 35 points.

Their first touchdown would be the result of a completed pass from quarterback Brandon McLinko to Steven Yates with 7:53 left in the fourth quarter. Basse would add the extra, the score in favor of the Trojans still, 35-10.

A Trojan offensive mistake would allow the Knights to score again before the remaining seconds of the game. On second and-10, the Trojans would fumble the ball on their own 44-yard line, and Towanda's Mitchell Peters would recover, running the ball into the end zone for the touchdown. Basse would again add the extra, and the final score would be set, 35-17.

Next week, the Trojans travel to Athens to take on the Wildcats and the Knights host Wellsboro.