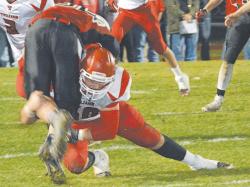 The Canton Warriors played host to the Troy Trojans during rivalry week in the final week of the regular season.

Troy held Canton to under 100 yards offensively as they put up 45 points during the shutout to claim victory of the Old Shoe.

Clark Jackson was perfect throwing the football on the evening for the Trojans as he went 8-for-8 for 155 yards and threw four touchdowns. Nathan Swain was on the receiving end of three of Jackson's four touchdown passes. Swain accumulated 108 yards on just four receptions to add to his three scores. Alex Butcher received the other Swain touchdown pass.

Ben Sherman added 109 yards rushing the football for the Trojans and found the end zone once himself. Walter Kelley also recorded a rushing touchdown for Troy.

Ridge Moore of the Warriors went 11-for-19 throwing the football on the game for 65 yards and also threw an interception. Moore led the Warriors on carries with 12.

Both teams took turns feeling each other out as they exchanged three-and-outs on each of their opening possessions.

Troy had the first scoring opportunity when they attempted a field goal midway through the first quarter but Collin Binford’s attempt was wide right.

The Trojans put the first points on the board during their next possession.

Jackson threw his first of four passing touchdowns to record the opening touchdown of the ball game. Jackson connected with Butcher in the corner of the end zone as the Canton defender got turned around and lost sight of the football. The point after attempt was converted and the Trojans jumped out to a 7-0 lead.

Troy then pulled some trickery as they caught the Warriors with an onside kick attempt that was recorded by Hunter Cohick of the Trojans.

However, Troy failed to convert on the extra possession.

On Canton’s next drive, Moore's pass attempt was intercepted by Cohick as he returned it down to the 4 yard line.

It was one play later that Sherman pounded it up the middle into the end zone to give the Trojans a 14-0 lead following the converted point after attempt.

The Trojans scored once more before halftime.

Troy scored on both of their possessions during the third quarter.

Again, Jackson floated a ball over the Warrior defense who were expecting a run into the hands of Swain. Swain turned on the jets and would find the end zone for the second time on the evening on a 52-yard touchdown reception.

On the Trojans' next drive, they had driven the field down to their own 16 yard line. Jackson took the snap, rolled to his right and fired a pass to Swain, who again was wide open as he turned and crossed the goal line for the third time on the game. The Trojans jumped out to a 35-0 lead heading into the final quarter of play.

Just like the third quarter, Troy scored on both of their drives during the fourth quarter.

The first drive of the fourth quarter by the Trojans ended in a 37-yard field goal by Binford as he put Troy up 38-0.

Troy will advance to play in the District Four Class AA championships as Canton waits to see if they can qualify for the Eastern Conference playoffs.