Trojans run to win over Milton. 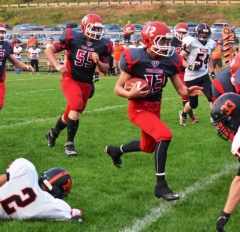 TROY - It was a thrilling season opener for the Troy Trojans at Alparon Park last night. Young as they may be, nothing would stop the Trojans from pulling away with a 22-15 victory over the visiting Milton Panthers last night under those oh-so-familiar Friday night lights.

"It was an atmosphere where it took four quarters to win the game; Milton played us very hard," Trojan head coach Jim Smith commented after the game. "We have to look to get better next week, and also to get a lot of guys healthy. I'm really proud because they dealt with a lot of adversity. We have a lot of young kids playing in positions they didn't expect to play. Despite that, though, we were able to come away with the win."

With a young lineup, the Trojans have some experience to gain, but they have all the heart they need to put points up on the scoreboard. Proof of this would come with two and half minutes wiped off the clock, on first-and-10 from the Milton 9-yard line, when Kurtis Roupp would run the ball in up the right side for a touchdown. Collin Binford's ensuing extra point was good, and Troy would go up 7-0.

Next, Milton would attempt to score on a 13-play drive, but fall short. Following a few Trojan runs, a punt from Troy's Alex Butcher would end the first quarter, giving the Panthers another chance and the ball on their own 42-yard line. On fourth and eight, Milton's Brandon Stokes would send a punt to the Trojans, which was then fumbled and recovered by the Panthers, who set up on Troy's 16-yard line, only to fumble themselves, this time with a Trojan recovery.

A penalty and a fumble on Troy's next possession would cut their run short, giving Milton the ball on the Trojan 22. Milton would snatch the opportunity and run with it, putting some points on the board with a Stokes touchdown with 5:52 left to play in the half. An attempted two-point conversion was successful, and Milton went up, 8-7.

A few more penalties and traded punts would round off the first half, sending the Trojans into the locker room down by one point.

Both teams would have a shaky start to begin the second half before things would pick up pace. A fumble here and a fumble there before the Panthers would score again, on first-and-10, with 3:31 left in the third. Brandon Stokes would be the one to put points up on the board again, racing 25 yards through the Trojan defense and up the left side. Stokes hit the extra point, and the gap widened, 15-7.

The Trojans, however, planned to answer back, and to do it quickly. Collin Binford would receive the punt, running an impressive 85 yards into the end zone for a touchdown. Troy was finally able to close the gap after a 3-yard two-point conversion from Clark Jackson; the scoreboard now read 15-15.

The Panthers would end the third quarter with a punt, and Troy would begin the fourth with possession, only to turn the ball over after coming up short on fourth-and-one. Even so, the Trojans did not waste precious time in coming up with the final points of the game. A few runs from Roupp, Binford and Tristan Drake would set the home team up at the Milton 12. From there, quarterback Clark Jackson would run 12 yards into the end zone for the touchdown. Binford's extra point made the cut, and with 1:58 left, the final score was set at 22-15.

The Trojans travel to Cowanesque Valley and Milton heads to Warrior Run next Friday for week number two.