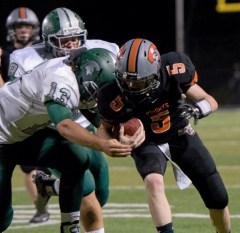 TOWANDA - The first quarter was a defensive battle for both teams.

But, the first quarter did not represent the whole game.

In the second quarter Towanda started the scoring with a well designed fake field goal that had Brandon McClinko throwing a perfect pass to Griffen Sikes for a touchdown putting the Black Knights up 6-0 at the 4:10 mark.

Hughesville responded with their own touchdown on the second play of their next possession with a 76-yard touchdown pass from quarterback Landon Henry to Zach Frye putting the Spartens up 7-6 at 3:15.

After a Towanda punt Hughesville went 74 yards and scored on another passing touchdown by Henry to Alex Welch, for three yards, putting Hughesville up 14-6 with just five seconds left in the half, ending the first half.

The third quarter started with a punt by Towanda. Hughesville scored on this possession on a reverse run scoring Frye on a 70-yard play putting the score to 21-6 at 5:11.

The Black Knights fumbled on the first play of their next possession and the Spartans went back to work.

Hughesville took advantage of the fumble and scored again on a Melvin Derhammer run for nine yards putting Hughesville up 28-6 at 4:13.

At that point Hughesville never looked back.

In the fourth quarter Hughesville would find the end zone for the last time scoring on a 2-yard run by Alex Welch making the score 35-6 at 11:56.

Towanda would end the night with a touchdown on a nice run by Keegan Kisner for 24 yards ending the scoring at 35-12 at 7:17.

Kisner gained 119 yards for Towanda on 16 carries and Dalton Potter was 8-for-16 passing for 32 yards, while McClinko had the 32-yard touchdown pass.

Henry was 11-for-14 for 195 yards passing for Hughesville and Frye ran for 107 yards on three carries, while Derhammer gained 59 on 18 carries. Frye had four catches for 68 yards and Ethan Duff had two grabs for 35 yards.

Hughesville improves to a 3-1 record while Towanda drops to 0-4.