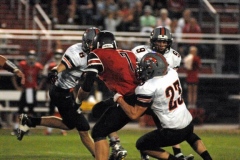 BLOOMSBURG - Towanda struggled out of the gate again in their 41-20 loss to Bloomsburg in non-league football action Friday.

They found themselves down at the half 21-0 after a scoreless first quarter.

In the second half the Knights got on the scoreboard and once again fought to end like in their last two games but it wasn't enough.

Keegan Kisner led the Black Knights on the ground with 111 yards on 14 carries while Steven Yates had four carries for 29 yards and a touchdown.

Through the air Brandon McLinko was 5-for-12 for 67 yards with a touchdown and an interception. Dalton Potter saw time in the pocket as well, going 4-for-7 for -3 yards.

William Davidson had four catches for 27 yards while Yates had two for 25 yards.

Through the air Nick Anderson was 5-for-10 for 124 yards and four touchdowns. Eric Foust was his top receiver with three catches, all touchdowns, for 109 yards.

Bloomsburg got on the scoreboard in the second quarter as Anderson hit Foust for a 6-yard touchdown with 6:20 left in the half. Lance Klinger added the point after to make it 7-0.

Anderson then hit Foust for another touchdown, this one 9 yards, with 45 seconds to go followed by a scoring strike of 6 yards to Christian Lee with six seconds to go. Klinger hit both extra points to make it 21-0 at the break.

The Panthers went up 28-0 when Anderson hit Foust for a 32-yard touchdown with 7:33 left in the quarter.

A little less than four minutes later Yates got the Knights on the scoreboard with a 25-yard run. Tyler Basse added the point after to make it 28-7 after three.

Towanda cut it to 28-13 eight seconds into the fourth as McLinko hit Yates for a 42-yard scoring strike.

But an 80-yard Kashner touchdown run on the ensuing Bloomsburg drive put them back in control 34-13 with 11:39 left to play.

Yates took the ensuing kick-off 81 yards to the house to cut it to 41-20 after the Basse extra point but that's as close as the Knights got.