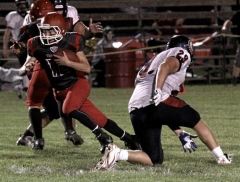 TROY - The Trojans trailed again in the fourth quarter only to rescue a 40-29 victory over Sayre at Alparon Park.

With Ben Sherman returning to the lineup for the first time this season - suffering a back injury earlier - Troy's ground game never looked better. Sherman amassed 243 yards on the ground and scored four touchdowns.

The Trojans went to Sherman early and often - with the first four carries of game and final run of the opening series rumbling for 41 yards and a score.

Sayre did not respond well early. On their first play of the game Garrett Weaver fumbled and Nate Swain scooped up the ball and raced 42 yards for a score. Collin Binford, last week's hero, added another PAT for an early 14-0 lead.

The Redskins kept to their game plan and gave Weaver the ball five times on the next series for 21 yards. After being aided by a pass interference call, Sayre scored on a 14-yard run by Tyler Belles and Marshall Felt added the extra point.

After Kurtis Roupp returned the kickoff to the 44-yard line, the Sherman Tank rolled on the first play of the series, scoring from 56 yards out, but Sayre blocked the kick. Troy led 20-7 early in the second quarter.

Troy's defense forced the Redskins to punt and, after a Sherman 10-yard run, Binford raced 55 yards for a score and 26-7 lead in what appeared to be the start of a rout.

The Redskins weren't going to let that happen. Methodically, they marched downfield with Weaver taking on the workload with six carries for 25 yards. It looked as though Troy might stop them on the goal line, but quarterback Gavin McCutcheon called his own number on a sneak. On fourth-and-goal from the one, the Trojan defensive line initially pushed McCutcheon back, but a second effort allowed him to score. Belles rambled around the end to pick up the two-point conversion to narrow the lead to 26-15.

Sayre's defense held and forced Troy to punt, but an errant snap sailed over Binford's head. He recovered the ball and was tackled on the 16-yard line and a personal foul moved the ball to the 8. On a good news/bad news play Weaver scored next, but strained his knee on the score and would not return to the game. He finished with 72 yards on 18 carries in only a half.

Belles added the two-point conversion and the Redskins went into halftime narrowly trailing the Trojans 26-23.

The start of the second half did not go well for Troy. After a penalty, Sayre forced the Trojans to kick off again. Troy called an onsides kick and the ball went straight to Matt Everly, who scooped up the pigskin, broke a tackle, and raced 55 yards for a touchdown. With nine seconds off the clock, the Redskins now had a 29-26 lead.

The defenses held tough into the fourth quarter until it seemed that the Sherman tank refueled and began gaining ground once again. Troy went to Sherman six straight times for 39 yards with the final run coming as a 2-yard touchdown. Binford added the PAT and the Trojans now had the lead and wouldn't let it go this time.

After stopping Sayre, Troy gave the ball to Sherman on four of five of the next plays for 31 yards, and a personal foul call helped Troy, bringing the ball to Sayre's 38-yard line. After faking a handoff to Sherman, Clark Jackson pitched to Roupp on a misdirection play for 28 yards. Sherman then plowed through the tired Redskin defense on a 5-yard touchdown run. Binford added the extra point for the final 40-29 tally.

Troy has reeled off three straight close wins to start the season and travels to Wyalusing next week. Sayre, now 1-2, hosts Wellsboro next Friday.